Critics expect US president to hate actor’s take in The Comey Rule. But he did it anyway 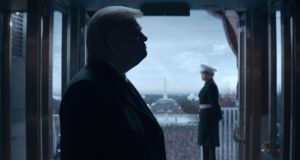 Brendan Gleeson delivers ‘a mediocre impression and possibly a great performance’ as Donald Trump, according to the Hollywood Reporter. Photograph: Showtime/CBS

Brendan Gleeson’s much-anticipated version of Donald Trump is almost upon us, and advance reviews are already starting to trickle out. The Comey Rule, based on former FBI director James Comey’s book A Higher Loyalty, about the events leading up to and following the 2016 US election which culminated in his being sacked by Trump, premieres in the US on Saturday  night and comes to Sky Atlantic and Now TV here next week.

Notionally, the two-part drama, with Jeff Daniels as Comey, isn’t actually about Trump, who doesn’t even appear in the first episode. Daniels told the New York Times this week that according to writer-director Billy Ray, The Comey Rule was about “the struggle to be an impartial public servant in today’s America”.

Early reviews have noted, often critically, how the drama goes along with Comey’s own self-image as a principled upholder of the law, and fails to confront directly the widespread criticism of his allegedly ego-driven handling of the Clinton emails scandal during the election campaign and how much that may have contributed to Trump’s eventual success.

“Ray doesn’t pay enough attention to the view of many who have known him that moral vanity plays a role in Comey’s character and behaviour,” writes Slate’s critic. “Beyond having Daniels offer a brief and not very persuasive confession that he can be ‘self-righteous’.”

This is not a drama that many viewers will come to without preconceptions. Having met and interviewed Comey when he was in Dublin a couple of years ago, I’ll be intrigued to see how well Ray and Daniels manage to shape a convincing portrait of this highly controversial and problematic figure. But let’s be honest. What we all really want to know is: what’s Gleeson’s Trump like?

“Gleeson works harder than he has to, to deliver something more than just another riff on a Trump impression,” reports the Washington Post. “While never completely convincing, he does impart the right mix of ignorance, arrogance and malevolence. No ambiguity is even required anymore; The Comey Rule rightly decides that there’s no essential mystery to solve about the president.”

The Hollywood Reporter, though, detects more complexity. “Trump is almost certain to hate Gleeson’s take,” it says. “But in many ways this is a generous read on our current president amid a sea of impersonations. With squinting, sneering, sniffling intensity, Gleeson plays Trump as a clever and calculating bully of weaker men, blindly obtuse one second and acutely manipulative the next. He’s a lumbering, land-bound, poorly dressed manatee of a man, but to be underestimated at your own peril. Gleeson’s accent and intonations waver, yet he captures an interiority the real Trump rarely exposes. It’s a mediocre impression and possibly a great performance.”

Let’s pause for a moment here to acknowledge two things. Brendan Gleeson is one of the great film actors of our time, and Trump presents a unique challenge for any performer to take on. Everything about Trump – his ubiquity, his cartoonish vanity, his malignancy and sheer banality – resists nuanced dramatic interpretation. How do you avoid falling into the trap of delivering the equivalent of a bad Saturday Night Live skit?

Gleeson’s performance starts to feel downright revelatory, as though he uncovered the Rosetta Stone to Trump’s soul, or lack thereof

“There’s something inherently phony in any depiction of Trump,” writes the AV Club’s reviewer. “The man is such a sentient cartoon, it’s hard to see a portrayal of him that doesn’t immediately come across as a satire. Gleeson does a better job than anyone has yet of finding a sort of horrific humanity inside the man. Wisely, he underplays Trump, making him more a weary solipsist than ranting buffoon, with a lived-in sense of lazy entitlement that feels honest and unsettlingly true. It takes a while to get past the strange not-quite-resemblance of the two men, but after the initial weirdness of it wears off, Gleeson’s performance starts to feel downright revelatory, as though he uncovered the Rosetta Stone to Trump’s soul, or lack thereof.”

Wisely, Gleeson has chosen not to do any publicity for The Comey Rule. With the political thermometer soaring in the US in the final weeks of the presidential campaign, there is absolutely nothing he could say or do that would not be twisted and turned against him (not least by Trump himself). He didn’t need to take on this apparently impossible role. Nor did he need to set himself up for the barrage of online abuse which will inevitably follow. It’s one thing for people in the arts and entertainment industries to proclaim their political virtue, as they do on a regular basis; it’s quite another for them to put their hand directly into the fire. We should salute his principles and his courage.

The Comey Rule starts on Sky Atlantic on September 30th

Vagina: A Re-education by Lynn Enright – teaches us what schools wouldn’t
6