Watchmen, Succession, Schitt’s Creek are the big winners at a ceremony unlike any before 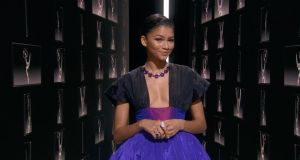 Euphoria star Zendaya made history with her surprise victory at the Emmys, becoming the youngest actress to win the outstanding drama lead award.

The 24-year-old set a record in picking up the prize for her portrayal of drug addict Rue in HBO’s dark school drama. Last year’s winner, Jodie Comer, was 26 when she won in the same category.

Zendaya appeared from her home surrounded by her delighted family, and fought back tears while clutching the golden Emmy trophy.

During her acceptance speech, former Disney Channel star Zendaya said: “I know this feels like a really weird time to be celebrating. But I just want to say that there is hope in the young people out there.

Watchmen, Succession and Schitt’s Creek were the big winners during a politically charged Emmy Awards and a ceremony unlike any before.

The biggest night in US TV took place against the backdrop of a pandemic, social unrest and a looming presidential election billed as the most consequential in generations.

The 72nd Primetime Emmy Awards were anchored from an eerily empty Staples Centre in Los Angeles, while the lack of the traditional glitz and glamour of the red carpet was another concession to the post-Covid-19 world.

Host Jimmy Kimmel jokingly welcomed viewers to the “pandemmys,” while the vast majority of nominees were at home, with winners appearing via video feed.

It was a disappointing night for Irish talent, with nominees Fiona Shaw, Andrew Scott, Sally Rooney and Paul Mescal all ending up empty handed.

Two of the night’s most successful shows, Watchmen and Schitt’s Creek, made overt references to the current turmoil.

Watchmen, a searing exploration of racism in America, won outstanding limited series while also picking up wins for directing and writing, as well as awards for stars Regina King and Yahya Abdul-Mateen II.

King, who won for outstanding lead actress in a limited series, wore a T-shirt bearing the image of Breonna Taylor, a black woman shot and killed by police in Kentucky in March, and joined a host of other stars urging viewers to vote.

Daniel, also a co-creator on the show, said the series was about the “transformational effects of love and acceptance,” properties he said were needed now more than ever. He also told people to vote, before apologising for making his acceptance speech political.

Succession’s wins included the biggest prize of the night, outstanding drama series, and a lead actor gong for Jeremy Strong. It was also recognised for its writing and directing.

Speaking from London, Succession creator Jesse Armstrong listed a number of “un-thank yous” during his acceptance speech, and targeted Donald Trump and Boris Johnson for their respective responses to the coronavirus pandemic.

The ceremony took place soon after the US reached the grim milestone of more than 200,000 coronavirus deaths, while social justice protests continue across the country.

At one point, Kimmel was joined on stage by actor Anthony Anderson for repeated declarations that “Black lives matter”. Many winners made politically charged speeches.

While the night was often dominated by the misery inflicted by the pandemic and the trauma of the deaths of black Americans, there were also moments of joy.

There was a mini Friends reunion. Aniston appeared from her home and delighted fans when revealing Lisa Kudrow and Courteney Cox were also there.

Little Fires Everywhere co-stars Reese Witherspoon and Kerry Washington spent the night together at a garden party, describing it as a New Year’s Eve celebration because they were “ready for 2020 to be over”.

The in memoriam section featured singer H.E.R performing Nothing Compares 2 U, as pictures of stars who have died in the last year, including Chadwick Boseman, Naya Rivera, Adam Schlesinger, Caroll Spinney, Carl Reiner, Jerry Stiller, Kirk Douglas, Sir Ian Holm and Dame Diana Rigg, appeared in black and white on a big screen behind the stage.