Review: Any resemblance of Ryan Murphy's thrilling curio to One Flew Over The Cuckoo’s Nest is entirely coincidental 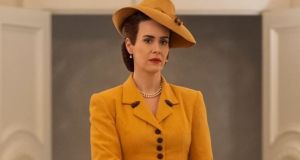 Isn’t it strange how some movies live forever while others – no less magical or memorable – dwindle into obscurity? For many years it seemed beyond question that One Flew Over The Cuckoo’s Nest belonged to the former category.

Now, it’s harder to be sure. The Simpsons riffed on it once 30 years ago (the Michael Jackson episode you will never be allowed watch again). But since then? Not a peep in the wider culture. Jack Nicholson’s McMurphy has flown alright – straight into the black hole where reside the neglected great films of yesteryear.

This is a huge injustice that must be corrected immediately. Or so believes Ryan Murphy, maximalist TV’s three-card trickster. And so the creator of Glee and American Horror Story has furnished us with a thrilling curio we never asked for: an origin story for Cuckoo Nest’s nefarious nurse Mildred Ratched (Netflix).

Is Ratched wretched? Well, it’s certainly a gear-shift from the film Miloš Forman made in 1975. Sarah Paulson compellingly plays malevolent Mildred as a brittle sociopath. This is to break with the wonderful Louise Fletcher and her Oscar-winning take on the character, which was that Ratched understood herself to be the hero of the story.

The whole point of Fletcher’s portrayal of true evil was that Ratched had no inkling she was the wicked one. That, as history tells us, is how the bad guys usually think.

Murphy isn’t interested in getting tangled up in all that. Instead he piles our platters high with bravura exploitation telly, in the process coaxing over the top turns from Cynthia Nixon as a politician’s wife and Sharon Stone as an eccentric heiress.

It truly is excess all areas: within the first five minutes we see a priest with his pants down and witness multiple brutal knifings. Later there’s a weird almost-sex scene straight out of Twin Peaks and an actual sex scene that goes full Black Lodge. In the middle, grippingly still and unknowable, like a bug on a leaf, is Paulson’s Ratched, contriving to gain employment at a cutting edge psychiatric hospital in Oregon.

Assuming there are any left, Cuckoo’s Nest fans will wish to investigate. But for them and everyone else the warning going in should be that this is All Ryan Murphy All The Way. Any resemblance to a quasi-neglected masterpiece of Seventies cinema is entirely coincidental.