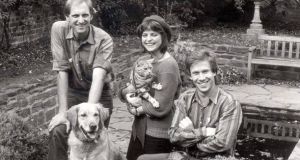 Here’s something to consider. If you had been born in the year that Blue Peter began, in 1958, you would currently be considering your retirement options. And if you had also been raised in accordance with the programme’s unswerving Best-of-British principles – with a sunny attitude, impeccable manners, and a hardy spirit, all-but-unaltered since the Blitz – your plans would most likely involve a sailboat.

As it celebrates its 60th birthday retirement is an unlikely prospect for Blue Peter (CBBC, Tuesday, 5pm) itself, indifferent as it has always been to the advancing of the years. It may regularly bury time capsules in the garden, filled with the jetsam of childhood (it was touching to see a Telletubby emerge from the prematurely ruptured Millennium Time Capsule last year, somehow more dated than Blue Peter), but time, in Blue Peter, is something that must be filled rather than contemplated.

This it does, per tradition, through relaying adventure stories involving huge machinery or wild animals; diligently applying children and their adult instructors to intricate arts-and-crafts busy work; and, of course, through the relentless pursuit of merit badges for every endeavour.

The show’s philosophy is part imperial, part scouting, imagining exploratory expeditions on ships (like the show’s enduring mascot) in the hope of making exotic discoveries that can be brought back home. That is the dream of kids and colonialists alike – Finders keepers.

As it celebrates 60 years of making good little Britons, the show also remains a ship-shape model for making good BBC presenters. They started out as surrogate parent types, as the sprightly return of Valerie Singleton and Janet Ellis for this broadcast reminds you (and the more sedentary glower of Peter Purves chills you). But gradually they became younger, the way policemen seem to do, with way cooler older sibling types, like Konnie Huq or Richard Bacon, on their way to other media jobs.

When a new competition winner, Nell, is encouraged to turn to the camera and announce, “Run VT!”, the Blue Peter factory shows no signs of slowing down.

To present, though, you must master the improvisational, cheery, wholesome bluster of live broadcast, which current presenter Lindsay Russell has down pat. “Lovely picture! I’m into that!” she enthuses. “Sorry! I just hit you in the face!”

Besides the brisk acknowledgment of six decades of history lovingly reduced into a run VT, the broadcast is child’s play as usual. Adorable presenter Radzi Chinyanganya gets to hold the wheel of the biggest ship in the British Navy (“Mum, I’m steering an aircraft carrier!” he says. “You only get this on Blue Peter!”).

Russell gets to wave her Brexit-blue passport at the camera and fly a hot air balloon over the colder reaches of the EU. (“These things only happen on Blue Peter!” she says.) And while both a fidget spinner and a David Walliams book are eagerly sealed into another Time Capsule, special guest Ed Sheeran, sadly, is not.

“Banging,” says the musician, a previous presenter of the show and an exemplar product of it, upon receiving its highest accolade, a gold Blue Peter badge. “Wow,” he says, reflecting on other recipients. “Me and the Queen.”