Women on the Verge: Maelstrom of a comedy from Sharon Horgan

Did you sleep with more than two women during our break-up, she asks. ‘In a good week, yeah,” he replies 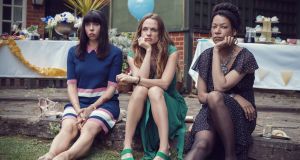 Eileen Walsh, Kerry Condon, and Nina Sosanya in ‘Women on the Verge’

In the conference room of an understandably troubled Dublin city newspaper, Laura runs through her forthcoming column ideas. Is anxiety the new depression? Is the epidemic in infidelity worse than we previously thought? Are we suffering from decision fatigue?

Laura, who might as well be described as the centre of Women on the Verge (Thursday, RTÉ Two, 10.30pm), a maelstrom of a comedy, knows whereof she pitches. In the slight and agitated figure of Kerry Condon, she reels through personal, professional and family encounters, unsure of her prospects, bathroom-sex deep in an affair with a colleague, chronically unable to either make or stick with the right choices. In short, she’s a scream.

Based on Lorna Martin’s novel (itself based on the author’s adventures in therapy), Martin and Sharon Horgan’s comedy follows in Horgan’s reliable mould, sympathising with characters who are at least sincere in their flaws.

“It’s not you, it’s me,” her friend Katie (Nina Sosanya) tells her fertility doctor, backing out of insemination. “You’re the first man in a while I would want to put a baby in me.”

To judge from the uncanny similarities between Aaron McCusker’s Martin, tall, dark, broad and shambling, and Horgan’s Catastrophe co-star Rob Delaney, I suspect Horgan has a type too. (Jonathan Forbes, who plays her deadpan acerbic brother in Catastrophe, also makes an appearance.)

It’s equally gratifying to see the wonderful Eileen Walsh return to another of Horgan’s dry comedies of dysfunction, as Alison, a blasé cynic who summarily undumps Martin in order to have a baby.

“You used to encourage him to go climbing on his own without his phone,” Laura says of the news. “You told him ropes were for wimps, remember?”

The show excels in that kind of badinage. Did Martin sleep with more than two women during their break-up, Alison asks. “In a good week, yeah,” he replies.

That everyone seems to speak with Horgan’s voice, though – so wry and so sussed – makes it feel more like an exercise in fine comic writing, than fine comic characterisation.

Otherwise it picks away at modern neurosis the way you pull at a loose stitch, or the quick of your thumb – with the funny, fierce instinct that everything, and everyone, is steadily unravelling.