The bird man of Tacumshin 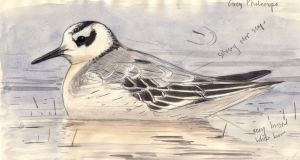 A sketch of a grey phalarope by Killian Mullarney

We are barely out of our cars when Killian Mullarney spots a female hen harrier, flying rather lazily above the reed beds that stretch out below us. A minute later, a common buzzard soars above the shallow, brackish waters to our right.

And five minutes after that, a kestrel lifts over the hedge behind us, drops down the hill in front, and suddenly holds dead steady against the wind, performing its signature hover in search of prey.

The simultaneous presence of three different birds of prey is a good indication of abundance of life in a habitat, something all too rare in our countryside today.

Tacumshin is a large mosaic of wetlands, barely separated from the south Wexford coast by a spit of gravel and sand. This barrier is only occasionally breached by storms, but continuous seepage keeps the water mildly saline. Its mudflats are renowned among birders for sightings of extreme rarities, lost on migration from the Americas and even from Asia.

It is also home to hosts of wintering wading birds and wildfowl, to many gulls, to some very unusual small perching birds and to the aforementioned diversity of top predators.

Very few people are as familiar with this remarkable place and its birds as Mullarney is. He is an artist who lives locally but has sketched birds across the world. His illustrations of hundreds of species are at once beautiful and meticulously accurate. They helped make the Collins Bird Guide the cutting-edge identification manual for the whole continent in the last 20 years.

And if you’ve ever used an Irish postage stamp with a bird on it, you’ve probably touched his artwork.

More recently, he has contributed many illustrations, and also recordings, to The Sound Approach series. This remarkable project uses advanced technologies to produce a unique library of bird songs and calls. It is breaking new ground in migration studies through night-time recording.

So if, like this writer, your visual birding skills are very limited, and you have a tin ear for bird calls, you might expect Mullarney to be rather intimidating company.

On the contrary, he is an exceptionally generous and patient companion. He painstakingly points out distinctions between similar species that must be blindingly obvious to him. He is also refreshingly humble about his own abilities.

While we are still in the car park, two small birds fly high overhead, calling faintly. Mullarney, who seems to hear the grass grow, confidently declares them to be greenfinches before he raises his binoculars. But then he exclaims, with delighted surprise, that they are in fact chaffinches.

You must try and see every bird as if for the first time, as a unique individual, not a template for a species

You might expect an expert to be less forthcoming about apparently confusing two familiar garden birds. But Mullarney says that the more you know about birds, the more you realise how many mistakes you make. “You must be your own toughest critic,” he says.

The brain is too quick to complete a partially grasped image, tilting identification towards a desired conclusion. You must try and see every bird as if for the first time, as a unique individual, not a template for a species.

Moreover, bird songs and calls are much less precisely studied than bird plumage. What delighted him on this occasion is that he found out something he didn’t know before. It wasn’t so much that he was wrong, as that he heard greenfinches make a sound more similar to a chaffinch’s than he had ever known them make previously.

He is not recording sound today, but he is carrying a long lens digital camera, a telescope, binoculars, and a sketch pad. He had grabbed a series of shots of the hen harrier, and now he examines them closely on the camera screen.

There had been suggestions that some much rarer but very similar species, a pallid or Montagu’s harrier perhaps, had been spotted here recently.

His images confirm what his eyes had told him. This is the more common bird. He can also tell, by the tone of individual feathers, that it is in the process of moulting, gradually replacing old plumage with new. In my binoculars, the bird had seemed a pretty uniform shade of brown. On his screen, much finer distinctions are apparent.

Digital photography has transformed advanced birding, and Mullarney uses his camera prolifically. It helps him spot tiny details on a dunlin sandpiper that tell him which of three subspecies it belongs to, for example.

“But while the camera is very seductive, it is no substitute for looking at birds,” he says. He believes that sketching in the field is far better way of grasping the plumage and poise of a bird that snapping away at it. He recalls wryly what happened when he took his first long-lens (but pre-digital) camera on a trip to Spain, where he saw many new or unfamiliar birds.

“I took hundreds of slides,” he remembers, “but I absorbed far less than had I been sketching them.” His sketches are made in the moment. “You must draw within four or five seconds of seeing a bird. The immediate registering of what you are seeing lasts such a short period.”

He is interrupted by more calls. “Bearded tits,” Mullarney exclaims. There they are, some 20 tiny birds with very long tails, jerkily undulating above the vegetation that gives them their newer name, bearded reedlings. For me, they are unicorn birds, studied in bird books and dreamed about since childhood, but never glimpsed until now.

From the car-park, there is a path straight through the reed beds. But you need good waders, the kind used for fishing, to navigate 18 inches of water and six more of slurpy black mud.

The terrain then shifts abruptly to firm salt marsh, baked after the long dry summer, and actually warm beneath oddly intense September sunlight. The shallow, glittering lake is alive with waterfowl, mainly wigeon, mallard and mute swan; the call of a single whooper swan heralds an upcoming influx from Iceland.

Tiny wading birds skitter across the mudflats on the lake margins. They are mostly dunlin, but Mullarney soon spots a curlew sandpiper, much rarer, and only passing through en route to Africa, among them. And each time he finds another, he takes pains to discuss its distinctive features – slightly larger size, “cleaner” look, longer neck, and clear whitish breast – as I struggle, with a little more success each time, to pick it out from the dunlin.

As we turn for home, we are happily interrupted, again. He has glimpsed a grey phalarope, another scarce passage migrant, swimming at the end of a long pool. It is busily picking minute life forms off the water with its needle-thin bill, and lets him wade almost right up to it, sketching its essentials as he does so.

What brings him back to this place, again and again, I wonder. Does he see a walk like today’s as a failure, because he hasn’t found some super-rarity?

“Absolutely not,” he says. “Of course it’s a pleasure to find rare birds, and the anticipation is half the pleasure, it keeps you constantly alert. But I’m always keen to see something new in common birds, something I’ve never noted before.”

What Courtney Love did straight after she left 1980s Dublin
7