Radio: The environment editor’s voice dips more than usual as he relays the imminent Armageddon 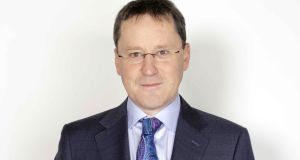 It’s just over a decade since listeners awoke to hear Morning Ireland (RTÉ Radio 1, weekdays) carry the startling news that Brian Cowen’s government had guaranteed Ireland’s wobbling bank system. As the sombre tones of business correspondent David Murphy made clear that morning, this was a seismic event.

It was also, despite or perhaps because of the ominous developments, a truly memorable radio moment. But on a day when there were no winners, one RTÉ personality in particular lost out. Murphy had been given the story only after a government spokesman had failed to contact George Lee, the network’s high-profile economics editor.

Missing out on the biggest story in a generation didn’t noticeably affect Lee’s career. After a brief stint as a TD, he is now RTÉ’s environment editor. But that momentous edition of Morning Ireland must still rank as the one that got away. At least until Monday, when Lee appears on the same programme to relay an even bigger story: the imminent arrival of Armageddon.

The publication of the UN’s grimly detailed intergovernmental report on climate change isn’t the day’s headline story, but Lee’s insistent, alarmed tone grabs the attention. He outlines to anchor Audrey Carville how a half degree increase in projected global warming could spell the difference between mere catastrophe and full-on apocalypse. “What the small increases in temperature do is eye-popping,” he says.

Lee paints a dire picture, with rising sea levels, species loss and extreme weather greatly exacerbated by each incremental rise in warming. His voice, always at home with bad news, dips more than usual as he explains how a two degree rise will wipe out 18 per cent of insect life, compared to a six per cent extinction rate at half a degree lower. And that’s before Lee gets to the hundreds of millions of people whose lives will be wrecked.

When Carville muses when governments need to take action on additional carbon reduction, Lee is emphatic. “Right now. The decisions taken right now will have very long and far-reaching consequences.” It’s the kind of phrase that could have been applied to the banking crisis. Ten years on, with the stakes much higher, Lee delivers his verdict in suitably sombre manner.

“They cannot say they haven’t been told,” he says. Even by Morning Ireland’s prodigious buzzkill standards, it’s a bleak start to the week. Yet despite the gravity of the situation, one can’t help feeling that Lee rather relishes finally being the one breaking the bad news.

Not that Lee need have bothered, judging by Minister for Finance Paschal Donohoe’s performance on Today With Sean O’Rourke (RTÉ Radio 1, weekdays). Appearing on the show’s traditional post-budget phone-in Q&A, the Minister sounds blithely dismissive when Donegal caller Tansy expresses concerns about the failure to increase carbon tax. “I don’t want to put in place a short-term measure until there’s a long term consensus in relation to it,” the Minister says, as though it were a minor policy detail.

He explains that big carbon tax hikes would affect people’s living standards and thus need political consensus, an attitude that suggests he may have missed the memo on climate change. When O’Rourke characterises this inaction as a “non-decision”, Donohoe sounds irked. “It wasn’t a non-decision,” he clarifies, “I made a decision not to do it.” It’s not the kind of decisiveness that inspires confidence for the future, however.

It’s a bland, safe turn by Donohoe, in keeping with the budget. Where raw anger used to crackle over the phonelines when Brian Lenihan or Michael Noonan performed the same duty during the austerity years, a mood of helpless apathy seems to inform the callers’ questions. When one man, Cormac, accuses the Minister of “talking crap”, O’Rourke sounds grateful for the mild flurry of antagonism.

For his part, Donohoe sticks to the formula of “acknowledging” concerns, while repeating the mantra that he needs to take inconvenient measures to raise money for the greater good. Such Civics 101 platitudes are presumably meant to demonstrate responsibility, but instead give an impression of self-congratulatory indifference. All in all, it seems a pointless budget ritual.

O’Rourke enjoys a far more lively time with presidential candidate Gavin Duffy on Tuesday. Duffy starts off by detailing how as a young man he caused a serious car crash, thus setting the tone for the interview. A robust joust ensues, with Duffy accusing RTÉ of being a “fan club” for President Michael D Higgins and O’Rourke calling his occasionally unsure-sounding guest “a fast driver but a slow learner”. While the presidential hopeful doesn’t display much statesmanlike poise, the encounter doesn’t hurt O’Rourke’s reputation as a formidable interrogator.

Cars and carbon fuels are hot topics when Muireann O’Connell sits in for Dermot and Dave (Today FM, weekdays). O’Connell notes that certain petrol stations have been raising their prices before budget day, despite the lack of tax increases in the budget. “It feels like everything just jumped about 10c in the last few days,” she says. “We’re taking a hit, lads.”

In her breezily free-associative manner, O’Connell switches from the geo-political (“Sanctions on Iran are coming in November, so the price of oil is going up”) to the hyper-local, looking for tips on the best value petrol stations. “If there’s a cheap place, let us know, and we’ll share the wealth,” she says. Judging by the text responses, quite a few listeners share O’Connell’s worries about the price of petrol. But the subject of climate change is notably absent from the conversation. There’s much talk about filling up tanks but not a whit about the impact of carbon fuels. It’s a telling illustration of day-to-day priorities in Ireland. It’s the end of the world, but we feel fine.

Like the rest of the country, Ryan Tubridy (RTE Radio 1, weekdays) is deeply saddened by the death of Emma Mhic Mhathúna, and devotes the opening  of Monday’s show to the woman who became a central figure in the CervicalCheck controversy.

As he talks about visiting Mhic Mhathúna in recent days, Tubridy’s shock is evident, as his sorrow: he even allows for anger at the failures that let her cancer go undiagnosed. But above all, his admiration for Mhic Mhathúna’s remarkable attitude and fortitude comes across. “She was without question one of life’s extraordinary people,” Tubridy says. That pretty much sums it up.