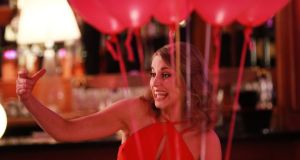 It feels more than deserved that that Amy Huberman – co-creator (with Rebecca O’Flanagan), writer, associate producer and star of the new comedy series Finding Joy (RTÉ 2, Wednesday, 9.35pm) – should now become author of her own television destiny. What’s more surprising, to those who have come to see her as Ireland’s Sweetheart, is that she should also be author of her own fart jokes.

To be honest, this comes as some relief; and not just to Joy, who more than once emits a nervous squeak in the way most studio notes would advise.

Huberman, a bright star with a maverick streak, had long seemed to chafe in the roles RTÉ deemed most appropriate for her: the wild spirit made glum in The Clinic, the immaculately-presented sadsack of Striking Out – anything in which the glamorous heroine must be humiliated to make her seem “relatable” – which made her baddie boss in Can’t Cope Won’t Cope seem like a holiday. Now we get to see her sense of humour. And it is satisfyingly filthy.

Like Joy, the show is stridently kooky – most people will decide whether or not to invest in the show the moment we discover it is narrated by her dog – but, like Huberman, it is determined to cut through the treacle with some unexpected edge.

Comedy should be heedless, seeking laughs from places less visited, and Huberman doesn’t hold back. Woken by a deadpan delivery man (David O’Doherty, in a hopefully recurring role) and fouled by her incontinent dog, Joy falls into brief consideration of being defecated on by a lover: “Can it ever be sexy?” she muses at the door. “I just feel, like, no? Never.”

What’s funnier? The shock of the gag, or the delightfully understated way Huberman takes a hatchet to her mainstream image?

There’s a politics to pungent humour, long the domain of schlubby male comics and, until recently, rarely afforded to women.

Huberman brings a trace of Sarah Silverman, Kristen Wiig and Anna Faris – and a heavier dollop of Sharon Horgan – to an otherwise conventional set-up: giving scabrous and scatological shades to this story of a helpless, lovelorn gal feeling the fear and doing it anyway.

When Joy is asked to step in suddenly to present a vapid lifestyle show, The Happy Hunter, a goading display of women who have it all (“mostly through sponsored treatments and events,” according to her severe producer), you may divine a more confessional joke, involving someone’s clear discomfort with what television bosses ask of her, but does it anyway.

With a supportive best friend urging Joy towards apparently therapeutic, post-breakup tears – which, in my favourite visual joke, Huberman tries to project like laser rays – there may be another echo of the commands of convention and admirable resistance. But the promise of the series is that this Joy will be unrestrained.

That is the mirth of the show in a nutshell; its deceptive sweetness full of gleeful nasty surprises.