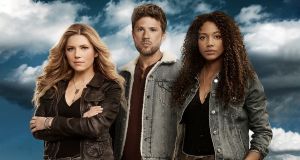 One way Disney+ has distinguished itself from Netflix, Amazon Prime and other rivals is with the quality of its original content. It hasn’t put out much new programming so far, but those shows it has produced – most notably The Mandalorian and WandaVision – have featured dazzling special effects and smart writing. Alas, that winning streak stutters with Big Sky, a creaky thriller that has the generic whiff of something you might find on any other streaming service.

Or, indeed, on ABC, the American terrestrial network (and Walt Disney Company subsidiary). That’s where it originally aired, in November, to muted reviews. Now it comes to Disney+ as one of the highlights of its new Star strand (essentially Disney+ but for grown-ups). It is stonkingly underwhelming, particularly considering the involvement of David E Kelley, producer of Big Little Lies, Ally McBeal, Chicago Hope and LA Law, among others.

Kelley’s golden touch has deserted him in this workaday mystery, set under the gleaming skies of rural Montana. And that despite the series leaning into Kelley’s regular trope of strong woman taking life by the reins. Our heroes are private investigators Jenny Hoyt (Katheryn Winnick) and Kylie Bunbury (Cassie Dewell), a duo who stumble on a prostitute-smuggling ring when two teenagers go missing.

Jenny and Kylie are presented as go-getters in the tradition of the Big Little Lies ensemble. But this is quickly undermined as they come to blows over Jenny’s husband, Cody, from whom she is separated (or so the loved-up Kylie thinks).

Cody is played by Ryan Phillippe, the 1990s Hollywood star (and, briefly, spouse of Reese Witherspoon), assuming a hangdog air as a loose-cannon ex-cop. The villain, meanwhile, is Ronald Pergman (Boardwalk Empire’s Brian Geraghty). He’s a creepy truck driver who claims to be doing his bit to keep the United States’ supply chain going through a “pandemic” about which the script is annoyingly vague.

Actually, he’s busier than he lets on. Ron has already abducted prostitute Jerrie (played by the nonbinary actor Jesse James Keitel). And then he has a run-in with the two teenagers, Danielle and Grace, and decides to kidnap them too. But this is not the plan agreed with his deranged mentor, a highway patrolman named Rick Legarski (John Carroll Lynch, aka Norm Gunderson from Fargo). Next, Cody, Jenny and Kylie start asking uncomfortable questions about the missing girls.

Everything that follows is predictable with the exception of a twist at the end of part one that lands from out of the blue.

If this sounds like the premise of an episode of Murder, She Wrote or Magnum, PI then that’s because this is the type of series to which Big Sky aspires. And thus we arrive at the ultimate irony: Disney+’s brave new dawn feels about as cutting edge as a ZX Spectrum or fluffy dice on a Ford Cortina.