Bloodlands: A thriller set in the so-called ‘new Northern Ireland’ 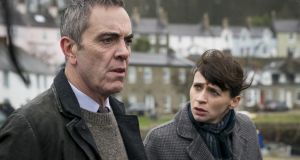 The virtually landlocked sea lough of Strangford in Co Down is one of the most bewitching areas of natural beauty in Ireland. Its meandering shoreline enfolds a maze of drumlins, creeks, causeways and small islands, making navigation, on land and water, disorientating. It is a place rich in history and legend, where one can envisage all manner of mysteries and dark deeds lying long undiscovered.

This watery world offers rich pickings for screen drama, a possibility taken up by writer Chris Brandon, who grew up in the harbourside village of Strangford and knows the lie of the land. It provides an evocative setting for his début television series Bloodlands, which begins airing on BBC One on February 21st.

It is produced by newly formed London-based HTM Television (co-owned by Jed Mercurio and Hat Trick Productions) and is its first commissioned drama. Mercurio is an executive producer on the series and, as the creator of Line of Duty, Bodyguard and Bodies, is also one of the most respected screenwriters in the business.

“It’s really pleasing that HTM’s first production took place in Northern Ireland, because I know the place pretty well,” he says. “Having said that, in Line of Duty we rarely venture far outside Belfast but in Bloodlands we were shooting mainly around Strangford and in rural areas. Going forward, I’d like to do more there because it has great crews, great facilities, great locations.”

In the opening segment the camera swoops over swirling grey currents, brooding wetlands and mudflats, following James Nesbitt’s hard-bitten detective Tom Brannick as he drives along the lough shore from his Belfast home to a crime scene beside a ferry terminal.

A startling sight awaits him. Dangling from a mechanical hoist is a large, black vehicle, which has just been winched out of the water. Brannick’s no-nonsense sidekick DS Niamh McGovern (Charlene McKenna) plays him a recorded message using a loyalist paramilitary code name, instantly recognisable to him from the 1990s. She shows him a postcard, which had been taped to the wing mirror. Its image of the towering, yellow Samson and Goliath cranes in the Harland & Wolff shipyards has an electrifying effect on Brannick.

Although Brandon has lived in London for 15 years, was at boarding school in England and studied at Trinity College Dublin, Strangford is the place he still calls home.

“My mum is English and my dad comes from around Strangford, so I always split my life between the two”, he says. “Until I was 13 I lived with my grandparents, in a house overlooking the water.

“Primarily, that’s where the idea for the series came from. I was so familiar with the landscape around the lough, with the mystery and the austere beauty of the weather and the land. The light is constantly changing. When we were filming, the weather could be tricky. You can have four seasons in a single day.

“It’s a place that tells natural stories so it was fantastic to be able to go back and tell this particular story. I felt it resonated with the geography of my childhood and of growing up there in the ’80s and ’90s, which, thinking back, were pretty hairy times.

“In retrospect, you remember secrets whispered in shops and the things people wouldn’t say to each other. Seamus Heaney puts it perfectly in that line, ‘whatever you say, say nothing’, and in the bog poems, where he writes about bodies in the land and unanswered questions. Down around there, there was always that sense of things happening around corners and people appearing out of hedgerows.”

Allegory of the land

Brandon’s terse dialogue resonates within a close-knit, insular community, where everyone is connected to or knows everyone else. It’s a community which makes its own rules and rituals, speaks its own language; it’s a place apart. In Brannick, Brandon has created a character who embodies his home place but grapples with the demands it makes on him. He is charged with keeping the peace while seeking justice, a challenge that risks bringing him into conflict with his own people.

“It’s a very familial place and, from a dramatic point of view, that’s what brings the tragedy home, because it’s that much more personal,” says Brandon.

“The original idea came to me when I went back to help a childhood friend make a short film, about seven years ago. I was looking out at the islands and a long thread of thinking began around the construction of a story about the secrets on the islands of Strangford Lough, which is so beautiful yet so harsh. I started working on the idea of telling an allegory of the land itself, using the story to invoke the land.”

Nesbitt plays the character of Brannick from the inside out, unerringly delivering the black humour and introspection of a jaded cop, beset by demons that have haunted him since the death of his wife 22 years ago. The single beam of light in his bleak existence is his medical student daughter Izzy (Lola Petticrew), who lives with him. The image on the postcard jolts him back to a time when they were a happy family and sets him on a relentless investigation into a cold case, which many in authority would prefer to see permanently locked away in the deep freeze.

Intriguing references to the outworkings of the Northern Ireland peace process surface and hard questions are asked about the strategy and price of peace, the deals and compromises involved in maintaining the integrity of the Belfast Agreement. It’s well known that it was a dirty war. The thing is, is it also a dirty peace?

“There is no finite or perfect finish to the process,” says Brandon. “The Good Friday [Belfast] Agreement is a fantastic achievement in compromise but it has to be an evolving conversation. When I started on the script this idea was less timely than it is now.

“Particularly in the last few years of Brexit and all of that, this conversation has become more relevant and cannot be disregarded. It needs to be kept going, questions need to be asked. But this isn’t a documentary, it’s not a heavy-handed opinion piece, it’s a thriller, it’s entertainment, but it does ask questions about how we got here and where we go from here.”

The storyline is set firmly in the present, in the so-called “new Northern Ireland”, where a different breed of scepticism towards the police exists and where former paramilitaries are caught up in the shady worlds of racketeering and organised crime.

“That element played a big part in discussions between us all,” says Brandon. “Organisations that have been used to one activity suddenly find that activity is less relevant, so they get involved in a parallel activity. It was very interesting to push ideas back and forth between us about what these people have become.”

Brandon describes working with Mercurio as “a dream come true for a writer. He was incredibly generous with his time and knowledge. Jed’s the absolute master of the thriller beat and knows instinctively how to craft an ending that will get people tuning in for the next episode and the next.”

“We got on very well,” agrees Mercurio. “It was great to be able to bounce ideas off each another. What’s noteworthy is that Chris has not created his own tv series before, so I think it was useful for him to tap into my experiences, the things that I went through when I was on the nursery slopes myself.”

Mercurio says that, fundamentally, HTM is looking to develop returning drama series. Does he think that Bloodlines has the potential to be one of them?

“Definitely. The hope is that once series one goes out, if we’re lucky enough to capture the audience’s imagination, they’ll want more from the characters and the storyline.

“When I first read the script, I thought it was really compelling. Chris creates an intriguing flow of events, full of twists and turns. It was nothing like I’d seen on tv in recent years. It’s set in Northern Ireland and it has something to say about the real contemporary world, but is also a highly fictionalised thriller that works against that backdrop.

“Tom Brannick is a very charismatic character and who better than Jimmy Nesbitt to play him? He really understands the character and brings such authenticity to the role. When you put Chris’s script in the hands of such a brilliant actor, the chances are you’re going to get brilliant results.”

Bloodlands begins on Sunday, February 21st at 9pm on BBC One