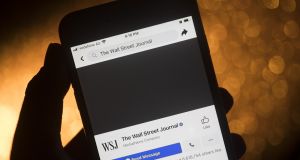 Facebook slapped a blanket ban on links to all Australian news sites in response to the government’s plans to charge for links. Photograph: Brent Lewin/Bloomberg

Back in 2012, this columnist, in the course of his then job as online editor of The Irish Times, became embroiled in a dispute over the use of hyperlinks to Irish newspaper sites. The newspaper industry’s representative organisation, National Newspapers of Ireland (now Newsbrands Ireland) claimed anyone posting links to its members’ articles was in breach of copyright unless a licence had been purchased. Matters came to an embarrassing head when a charity found itself on the end of a demand for payment for links on its website.

The entire affair was a facepalm moment for those trying to negotiate their way through the still relatively new hazards and challenges of digital journalism. Newspapers were already putting significant energy and resources into making sure their articles ranked highly in Google’s search results, while social media platforms were increasingly important tools for reaching the audience. It seemed counter-intuitive, to put it politely, to be simultaneously trying to penalise those who were sharing our journalism online. After all, links are the lifeblood of the internet; charging for their use seemed like an absurd misunderstanding of this fact.

The NNI’s copyright claim was quietly shelved and everyone went about their business. But now, nine years later, the question of charging for links is back with a vengeance, as the Australian government prepares to pass legislation forcing search and social media companies to pay for the privilege of linking to the country’s news media sites. Crucially, unlike similar regulations in EU countries, it imposes a system of binding arbitration which would ultimately decide how much money should be paid.

This is no arcane dispute over legal technicalities. It goes to the heart of how the ecosystem in which information is now distributed works. On one side of the argument are the massive economic behemoths of Google and Facebook, along with a wide swathe of people committed to the idea of an open internet. On the other are an array of still-powerful media interests (unhealthily dominated in the Australian instance by Rupert Murdoch), along with a significant section of political opinion and civic society concerned by the untrammelled power of Big Tech.

So what has changed since 2012, apart from the vastly increased power of Google and Facebook? On the face of it, the claim for payment for links is as ill-conceived now as it was then. Newspapers and broadcasters still optimise their websites for search engines and push their content aggressively on social media platforms. If they don’t want links they could stop doing that tomorrow, should they so choose.

The reality, though, is that the terms of the debate have shifted from such considerations and we now find ourselves in a new era of overt confrontation between Big Tech and the regulatory state. After all, Google and Facebook have shown themselves perfectly willing to tailor their services to the requirements of authoritarian regimes around the world. More democratic societies are taking note and adopting a much more aggressive posture. A link tax may still not make much sense, but the evidence so far is that it’s an effective weapon for squeezing concessions and cash. So Australia is less an outlier than a harbinger of the power struggles to come.

The reactions of the tech companies have been instructive. Both have been negotiating alternative funding agreements. Google is now has concluded deals on a new curated news product. But on Thursday, Facebook dramatically slapped a blanket ban on links to all Australian news sites, and on access to international news sites from Australia. The blackout, intended to show what the effect would be if the law is applied, also affected many non-news pages, including state health departments, emergency services and several charities. Those who attacked Facebook for defying the law were clearly wrong; the company is within its rights in choosing not to offer links for which it may be charged. It remains to be seen, though, whether such a brutal assertion of market power provokes a backlash against the law among the general public (presumably the intended objective) or merely reinforces the point that these companies are just too dominant and unaccountable.

Not surprisingly, the law has many admirers, some close to home. This week Newsbrands Ireland published its submission to the Government’s Future of Media Commission. Among its recommendations is one to “transpose the EU Copyright Directive which provides a legal basis in Article 15 for publishers to negotiate payment for the use of their content with platforms. This should be supported by mandatory codes similar to those being developed in Australia”. Suddenly, 2021 feels a lot like 2012 all over again.

10 Tutu believes reconciliation possible for all