That Guy: The actor everyone recognises but no one can name

John Carroll Lynch on life as an almost famous face, his Irish roots and his new Disney+ series 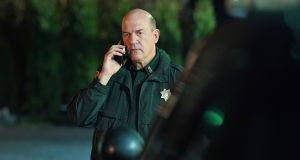 Do you recognise this man? John Carroll Lynch in Big Sky

“There’s a show called BoJack Horseman. Do you know it?” John Carroll Lynch asks me.

I do. That’s the animated series about an equine actor sinking disgracefully into underemployed middle-age.

This conversation has been going on for as long as we have had cinema. Out there in the digital chattersphere it is often referred to as That Guy syndrome (apologies for the gender-specific terminology). You know? That guy! He was in The Green Mile, The Rock and The Hurt Locker. David Morse! That’s the guy. Margo Martindale? She’s the ruthless Soviet handler in The Americans and John C Reilly’s mum in Walk Hard.

Every now and then, one of those ubiquitous character actors gets a hand-up from the Academy. When JK Simmons won his Oscar for Whiplash, he escaped full-on That Guy status, but you will still see him in only a handful of lead roles.

As the folk behind BoJack Horseman would confirm, John Carroll Lynch now stands at the front rank of That Guy aristocracy. He was the most likely suspect in David Fincher’s magnificent Zodiac. He was the real founder of McDonald’s in The Founder. He recently popped up on Netflix as activist David Dellinger in Aaron Sorkin’s The Trial of the Chicago 7. From this month you can see him as a Highway Patrol Officer in Disney+’s buzzy rural mystery series Big Sky.

Raised in unglamorous Boulder, Colorado, an alumnus of the Guthrie Theatre, Lynch has been fleshing out great films and TV series for 30 years. When did his face first register? I’m betting his role as Frances McDormand’s supportive husband in the Coen brothers’ Fargo made a difference. That was 1996 and he’s been That Guy ever since.

“The minute Fargo came out the idea that the Coen brothers would trust me legitimised me as an actor,” he remembers. “That legitimised my participation in the industry. I went back to Minnesota to visit my soon-to-be wife, who was working in the company at the Guthrie Theatre in Minneapolis. I was at a fundraiser and this guy said to me: ‘You seem to be doing pretty well out there? What’s your business model? What’s your calling card? What’s your sales point?’ I said: ‘Well, first be in an Oscar-nominated movie. And let’s see if that helps.’”

Sure enough, Fargo received seven nominations, including one for best picture. “It changed everything,” he says. “And it’s a tribute to the film’s longevity and also the people I got to work with.”

There is a lot of Irish-America in Lynch’s CV. He attended Regis Jesuit High School in Denver before going on to study theatre at the Catholic University of America. You could easily see that round, characterful head yelling his way through John B Keane at the Abbey. Sure enough, when he registered with a well-known DNA testing service, the results were unambiguous.

“I had 23andMe done. It was clear this face does not come from any place but Ireland,” he says. “Ha ha! There’s no doubt. We went to that museum in Dublin – the one for the diaspora – and they have this chart that lets you put in your name and you see where you’re from. I put in ‘Lynch’ and there was nothing but points all over the country.”

Lynch was raised a long way from the movie business. He was raised further still from Broadway. I had read that he got the bug when watching his brother play one of the Knights of the Round Table in a production of Camelot. The possibilities of transformation hit him and stayed with him throughout adolescence.

“If there is a story to be told that is the story,” he says. “The desire to become somebody else is what appealed to me. As a teenager I wanted to be somebody else. Even if I could do it for a few hours. And I had fallen in love with the storytelling aspects of dramatic literature. I’d fallen in love with the themes that can be expressed and the humanity that can be experienced. And the stories we can tell each other. It’s the only thing that we have.

“We think of humans as a tool users. But there are a lot of animals in the world that use tools. But I don’t hear their stories. Maybe they do have stories. But we’re definitely storytellers.”

A distinct school of recognition attaches itself to prominent character actors. I recall, over 20 years ago, bumping into a veteran American performer at a Dublin function. “You don’t know where you’ve seen me before?” he joked. Some may have remembered him from this John Carpenter film or that Milos Forman epic, but he had become used to people saying “Ooo, what were you in? Oh, don’t tell me”. I wonder what projects fans mention first when they run into Lynch. Maybe it’s American Horror Story. Maybe it’s Shutter Island.

“More and more these days they know where they know me from,” he says. “But for a long time what I loved was people thinking they knew me from their own life. I got off a plane and this woman said: ‘You work at the Ready Print in Flagstaff? Right?’ Or ‘You’re the East High School tennis coach’ or ‘I know you from the PTA’. I actually love that level of familiarity.”

A few more viewers will be mistaking him for pals after viewing Big Sky on the new Star hub (I believe that’s the word) within the Disney+ channel. Based on a novel by CJ Box, the show follows Cassie Dewell and Cody Hoyt, a pair of private detectives, as they investigate the abduction of young women in remote Montana.

We shan’t spoil anything by saying too much about Lynch’s character, but we can reveal that David E Kelley’s show, originally made for ABC, is not afraid to mix up the tones. There is something of Veronica Mars in the opening sections. Elsewhere it is disturbingly violent. It seems to have grabbed audiences on its American debut.

“Yes, the challenge was to create a network television show that embraces a level of darkness that does not normally get embraced on network television,” Lynch says. “That was a real risk for ABC. And I’m very glad it’s paid off for them. I’m very glad that it’s popular show. Yeah. I think it’ll be helpful in other circumstances. They don’t soft sell the damage that is caused. I hope we’ve done it justice.”

Lynch marches on. Three years ago, he paid accidental tribute to one of the greatest That Guys of all time when, for his directorial debut, he gave Harry Dean Stanton a lead role in the excellent Lucky. He has turned up in The Handmaid’s Tale, Veep and Tamara Jenkins’s 2018 film Private Life.

Lockdown has slowed him down a little. As we speak, Lynch, who lives with his wife in New York state, is quarantining at a rented property in Glendale, California, but more work is looming. “The industry has become kind of multi-national,” he says. “If you continue to work you get work in a lot of a lot of different places. You don’t have to live in LA. If you are fortunate enough.”

And you are talented enough. And you put in the hours.

We will leave it with the precise quote from the animated version of his distinguished colleague.

“It’s for John Carroll Lynch, CCH Pounder and all the other character actors who live in lucrative obscurity,” she yells, discharging a pistol. “The blood I spill today is for us all! I’m Character Actress Margo Martindale!”