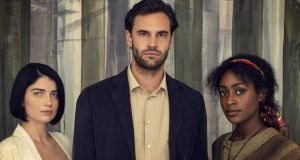 Eve Hewson, Tom Bateman and Simona Brown in Behind Her Eyes

So you’ve made it through all six hours of Netflix thriller Behind Her Eyes and now you’re picking your jaw off the floor. And with good reason. The show’s shock ending isn’t so much a twist as a fearless act of genre-flipping. All along, Behind Her Eyes has encouraged us to believe we are watching a glossy whodunit. And then, like a magician reaching into a hat, it reveals itself to be supernatural romp, with all the trimmings. With that preamble out of the way, let’s get into it. And yes, spoilers ahead.

The first thing to note is that Eve Hewson’s Adele hasn’t really seemed like herself for much of the series. There turns out to be a logical explanation. Her true identity is drug addict Rob (Robert Aramayo), who bodysnatches the real, non-sociopathic Adele after she shares with him the secret of astral projection during their stint in rehab together. A tip for all the Adeles out there: you might want to keep your weird, floaty cosmic powers to yourself.

Let’s rewind and recap briefly. The story begins with frustrated single mum Louise (Simona Brown) heading out to a singles bar where she is stood up by her pal. But that’s okay because she bumps into charming newcomer David (Tom Bateman). They’re soon in a romantic clinch – until David mutters sorry and runs away.

Louise assumes she will never see him again. However, she assumes wrong as he turns out to be her new boss. Naturally they quickly embark on an affair. Less predictably, Louise, without David’s knowledge, becomes secret best pal to his creepy wife Adele, who means well but appears to have deep-seated emotional issues.

So far, so clichéd. It’s in the final instalments that Behind Her Eyes goes from hokey to unhinged. We discover Adele is actually Rob. And then Rob/Adele pulls off his corporal heist a second time. “Adele” – aka Rob in disguise – feigns a suicide attempt by over-dosing and setting her house ablaze (echoing the fire in which Adele’s parents perished).

As he has correctly predicted, this causes Louise, traumatised by her mother’s suicide, to dash over in an rescue attempt. Louise then uses her own powers of astral projection – as picked up from Adele – to float upstairs Why? Who knows, apart from the fact that the plot requires it.

And that’s because it allows Rob – whoa this is confusing to write down – whoosh downstairs as a twinkly Lovecraftian blob, and then possess Louise. Adele dies, with Louise’s mind trapped inside. Wow – bonkers!

It’s a switcheroo at many levels. We’ve already seen Rob’s body at the bottom of that well in Scotland. The implication in previous episodes had been that David, in a fit of pique over Rob’s closeness to Adele, murdered Rob and tossed him into the gloom.

But no. In Scotland, Adele tells David that Rob overdosed on heroin and convinces her husband to help her dispose of the body. Actually, the corpse contains the mind of Adele to whom Rob had administered a fatal heroin shot after talking her into swapping bodies via astral projection. This leaves Rob, who had been jealous of Adele’s perfect life and fancied the pants off David, to claim it all as his own.

There’s also a cameo from Co Wicklow actress Eva Birthistle, as a Brighton cafe owner whom Adele has accused of conducting an affair with David. It was all in Adele’s head however – or, technically, in Rob’s head inside Adele’s head. Feel free to lie down.

I’m not even writing this, I’m astral projecting it on to my laptop from the kitchen, where I’m maniacally chopping asparagus.

The supernatural angle apparently came as a shock to the cast, too. In an interview with Entertainment Weekly, director Erik Richter Strand explained that Eve Hewson, when reading for Adele, was familiar only with the scripts for episodes one and two. So, just like the rest of us, she started off thinking of Adele as merely a highly-strung wife. As opposed to the more obvious possibility of her being a supernatural soul-vampire floating around north London (and spying on Louise’s trysts with David).

Reviewers have been down the middle over whether the twist – entirely true to the 2017 Sarah Pinborough novel – pays off. Variety, for instance, dismissed it as “ridiculous”. While praising Hewson as “terrifying”, it despaired as Behind Her Eyes goes from “taut thriller to the realm of the bizarre and downright fantastical”.

“Here’s the thing about the ending of Behind Her Eyes,” the reviewer elaborates. “It’s surprising, but even more than that, it’s stupid.”

Vulture, though, has another take: that Behind Her Eyes is subverting the “crazed woman” trope so beloved of TV.

“We may have first assumed that Adele really was disturbed, which plays into a lot of stereotypes about women and mental illness. Then we may have figured David was the prototypical lousy, controlling, gaslighting husband, which opens a whole other assumption-driven can of worms. Ultimately Adele was a disturbed woman, but only because another man, not her husband, was controlling her actions.”

That’s an intriguing reading. And clearly Behind Her Eyes is trying to say something about the assumptions we often make about female protagonists in crime fiction. Nonetheless, it’s hard to disagree with Variety’s assessment that we doesn’t spend enough time with Rob, the body-snatching villain. Because of this, we don’t see it coming as the story gears up to unmask him as the hidden antagonist.

Director Strand disagrees. He insisted that the audience was being prepared from the early instalments for the suddenly lurch into the supernatural.

“We were sowing the seeds for that scene from episodes one and two as we got to know her dream life and that she is suffering from presumably a sense of guilt form having not been able to prevent her mother’s suicide,” he said. “This is something that’s haunting her to this day in her dreams. It was combining that with the very overt manipulation of Adele. Adele has so very carefully crafted her own suicide with the specific intention of getting Louise to come.”

He’s certainly giving his own series the benefit of the doubt. And yet, the ending is so hysterical it essentially defies criticism. There is no straightforward way of taking a workaday “grip lit” thriller and turning it into identity-swapping eldritch horror.

Behind Her Eyes flings caution to the wind and just goes for it. Even if it doesn’t make sense, you can only admire its chutzpah. We live in crazy times. Maybe Behind Her Eyes is the equally crazy show we need right now.