Game of Thrones season eight, episode two review – Everyone has death in mind

Review: Forgiving and flirting in Winterfell – and ready to fight to the end, which may be imminent 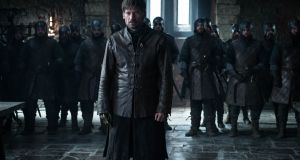 Game of Thrones: the army of the dead approaching. Photograph: HBO

Crouched down by the ramparts of Winterfell, trying to get some alone time on what may be the eve of mankind’s extinction, the Hound gives as good a synopsis of the latest episode of Game of Thrones as anyone.

“Oh, for f**k’s sake,” he sighs when another former associate heaves into view. “May as well be at a bloody wedding.”

Now that would be something.

Weddings are usually eventful affairs in Game of Thrones, where viscera are exchanged more liberally than vows, and toasts are made with poison. Here in Winterfell, however – with the army of the dead approaching, preceded by new allies who are only marginally more welcome – it’s an occasion for impromptu get-togethers, late night ceremonies, some truly terrible flirting, much fireside drinking and, above all, the chats.

Winterfell’s latest arrival might have been its briefest. Everyone’s got an axe to grind with Jaime Lannister, the Kingslayer, Boypusher, Starkbotherer. But Brienne, his one-time captor, vouches for his character development. “He is a man of honour,” she says of the once leonine figure, now more grizzled than gold. Even Bran, defenestrated into destiny, goes easy on him. “The things we do for love,” Bran says, with the knowing season one callback of a true superfan. Welcome to the party, Jaime.

While waiting for the descent of the Night Walkers, whose vast advantage is depicted on a battle map as a looming wall of pieces that fills the board, there is little to do but shoot the breeze, come clean and clear the air.

The humbled Jaime submits to fight under Brienne’s command. Daenerys and Sansa almost reach a détente, with hand-on-hand candour, until the small matter of the North’s subjugation comes up. “We will never bow to anyone else again,” says Sansa, and the enviable sharp lines of her leather body armour lets you know she means it.

In the meantime, the boys are back in town. Sansa tearfully welcomes back her near-brother Theon; the sole remaining brothers of the Night’s Watch briefly regroup; the residual Brotherhood without Banners gad about, and Lannister brothers Tyrion and Jaime slink away to consider their respective transformations: “To the perils of self-betterment,” toasts Tyrion. Brothers gonna work it out.

Sisters, on the other hand, are doing it for themselves. “We’re probably going to die soon,” Arya tells Gendry, by way of foreplay. “I want to know what it’s like before that happens.” At least her moves are smoother than Tormund’s, whose seduction technique involves very tall stories (“That’s how I got so big: giant’s milk”) and tributes too adorably sincere to take for double entendres. “I’d knight you 10 times over,” he tells Brienne. But it’s Jaime who helps her break that dragonglass ceiling and dubs her the first female knight in Westeros. Brienne, never someone given to emotional display, lights up afterwards in the most cheering moment of the show.

As a whole, in fact, the episode is so relentlessly touching, so full of honour-bestowing, forgiving, live-and-let-living, that it begins to get a bit fishy. Only Dany – whose father went quite, quite mad, remember – seems like she might break bad, responding to Jon’s revelation of his true parentage not with an immediate review of her incestuous romantic involvement, but with concern for her own advancement: “You’d have a claim to the Iron Throne!”

That’s only if they survive this night of the living dead, heralded by the episode’s end with our first glimpse of the Night Walkers. It’s portentous. The episode comes freighted with considerations of The End: in Gendry and Arya’s ruminations on death and its many faces; in Bran’s intimation of the Night King’s plans for “endless night”, even in Tormund’s oddly comforting proclamation, “We’re all going to die. But at least we die together.” In Game of Thrones, it’s not a wholly maudlin thought: Valar Morhulis.

“How do you know there is an afterwards?” Bran had asked Jaime earlier, with chilling effect. At least we have the assurance of four more scheduled episodes, but who knows which of Winterfell’s guests will remain, following the arrival of the most fearsome wedding crashers of all?