Daenerys Targaryen from Game of Thrones arrives in Dublin 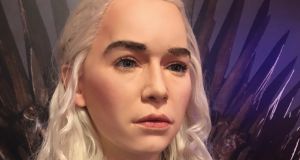 Winter has come to the Dublin Waxworks Museum just as Game of Thrones reaches its bloody climax.

On Wednesday morning, the Dublin city centre tourist attraction added Daenerys Targaryen to its roster of wax models and positioned her within a sword’s thrust of Donald Trump and across the corridor from Phil Lynott and his mammy Philomena.

She is also within striking distance of Ryan Tubridy and Eamon Dunphy and next door to Dermot Morgan’s Father Ted who has been stationed in a room decked out to look like the living room in the Craggy Island parochial house.

With her strikingly blonde hair and generally pleasant demeanour, the diminutive Targaryen is one of the few characters in the wildly popular HBO series to make it out alive - at least so far - although there is time left to kill her off.

The museum is hoping her stint in the Westmoreland St venue will be similarly enduring, not least because of the time and effort that was required to make her.

All told, the process took more than six months from start to finish with the artist PJ Heraghty using a combination of video footage, stills and 3-D imaging the bring the character into being.

Targaryen is the first but not the last Game of Thrones character to enter the museum and Liam Cunningham’s Davos Seaworth is now being made with the Irish actor having already sat for the sculptor.

Because the museum has only one sculptor, it has to think long and hard about who it models with the two most recent additions being the US president and Pope Francis who took a jaunt around the city in a popemobile last year to coincide with the visit of the real Pope.

“We picked Targaryen because of the programme’s connection with Ireland with much of it having been filmed in Northern Ireland and because we want to bring more women in and Targaryen is a strong and positive character,” said museum spokeswoman Laoise Keaveney.