Late Late Country Special: ‘I’m Ryan Tubridy and I eat dinner in the middle of the day’ 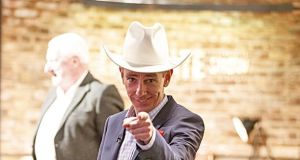 Ryan Tubridy again ingratiates himself with the real people of Ireland on this, the latest Late Late Show Country Special.

“Hello, it’s me Big Ryan Tubridy and I eat dinner in the middle of the day. My favourite bullock is called ‘de Valera’ and my favourite song is called ‘The Angelus’. I still read the Sunday Press somehow and my main Netflix bingewatch is ‘I don’t have rural broadband’ which Old Murt repeatedly screams at me from his weeping chair. Old Murt is my solicitor, my GAA coach and my muse.”

And so it is, that Ryan Tubridy again ingratiates himself with the real people of Ireland on this, the latest Late Late Show Country Special. He might not use these exact words, but this is the gist.

The great man is channelling his Fianna Fáil roots and reaching his well-shaken hand out to those doomed to live in what we in the Irish Times call “the badlands”, an irradiated wasteland beyond Greystones, where the outlanders toil, cultivating civil servants, business parks and EU grant applications.

There is no Country ’n’ Irish in Dublin, where Ryan lives in a steel and glass replica of JFK’s head. This is a fact.

Leave the city and country music emerges from your radio dial in a rush of twanging guitars and micro-regional place names (Country ’n’ Irish songwriters have never found a townland too obscure to wax lyrical about) but in Dublin they prefer opera and sexting.

One day on Dame Street I thought I heard some Country ’n’ Irish and it momentarily brought me back to the hazy, halcyon summers of my youth beyond the Pale. Then I realised that it was just an overexcited Monaghan man on a motorised scooter. I danced to it nonetheless.

Anyway, a few years ago, the West Brits of Montrose realised they had to do something to lure in more of these moneyed Curly Wurly munchers and decided to try some culchie-eral appropriation with a Late Late Show Country Special. Now, it’s one of the most viewed programmes on their calendar outside the Late Late Toy Show, which doesn’t count because it’s compulsory.

Gay Byrne would never have permitted such ecumenism. “Country ’n’ Irish music?!” he would have yelled at the terrified researcher who suggested. “But Ireland is a TOWN!” And then he would have showed a condom to a bishop while snapping his fingers to jazz.

So who’s on tonight? There’s Daniel O’Donnell, who I’ll not say a word against. The man is a saint. I would KILL for him. He comes out singing a countrified version of Walk of Life flanked by a phalanx of relative youngsters. His voice undulates soothingly like the hills of Donegal and even though he could crush Ryan with just the twinkle of his eyes, he chooses not to (which is his prerogative).

He and his croonies (this is a word I’ve invented for singing cronies) are soon joined by Trudi Lalor and Cliona Hagan who are sitting on a big car even though they are inside and don’t really have far to walk.

And there’s more. As you may know, jiving has made a bit of a comeback in some areas because people aren’t getting vaccinated, so 100 jivers join them. And throughout the audience do that out-of-time clapping thing that distinguishes Irish audiences from everyone else in the world (Irish country music is an interesting genre. Its chord structures are that of American country music except its much faster so that our troubled people can dance to it, all hopped up on scampi fries and Lilt).

Ryan Tubridy emerges, his trousers held up with twine, swigging red lemonade from a jug and quoting “the Gambler” (only one of these things is true). His first task is to announce the winner of a competition called Ireland’s Next Country Star. He’s joined for some gentle truisms about the music business from Margo and Nathan Carter, an Englishman who as adopted our ways much like Kevin Costner in Dances with Wolves.

The winner is Clodagh Lawlor who sings Shallow from the film A Star is Born. She is a very good singer.

After the break, Ryan gathers a number of Country ’n’ Irish luminaries and some of their family members in a segment called “Circle of Friends” where they all reminisce about their entry into the music industry then sing duets together.

Robert Mizzell and his father Richard sing I Walk the Line. Then Suzanne McCann and her 13-year-old granddaughter Sinead sing Teach Your Children by Crosby Stills and Nash. Cliona Hagan and her sister Nicole sing Mick Hanley’s Past the Point of Rescue. And yes, I sing along to all of them.

Then Jimmy Buckley and his daughter Claudia sing Proud Mary. I SING ALONG TO THAT TOO. These songs are good. They’re barely country songs.

“TUBRIDY IS TRICKING US!” the angry people of Dublin 4 cry. “TUBRIDYYYY!”

There is a little bit of country music grit in the conversations though. Mick Flavin talks about his career and his struggle with alcohol. His son Brian, who’s deaf, talks about how nice it is his children can hear his father’s music. Earlier Robert Mizzell alludes to his time in foster care as a child. “It’s like a country song,” says Tubridy.

Then a row of country luminaries that I don’t have the wordcount to list, sing classic Hank Williams songs while swaying. That’s another thing to note about Irish country stars. They shun complicated dance moves, preferring to sway gently like wild flowers in a breeze. This is because Irish people do not have hips. Instead our legs go up and down inside our bodies like in a 1970s children’s cartoon called Bod.

After the break, there’s a sort of quiz show called The Wagon Wheel of Fortune. Teams of Country ’n’ Irish aficionados have to, depending on the whims of a spinning wheel, bounce a sliotar, jive and guess which country singer is lying about owning a dog. This is a very strange thing to have to do unless this is a new type of crime we have to watch out for now. Then an animated version of the dog talks. Seriously. I think, “Finally, it’s happening” and call the emergency number in my wallet.

Then Daniel O’Donnell sits down with Ryan for a chat. He talks about country music and his sister Margo and Big Tom. I’m just getting it in here now, but he sounds presidential, regal even. Then Father Brian D’Arcy gives him an Irish Country Music Hall of Fame Award and everyone says nice things about him because he deserves it.

It all ends up with Michael English leading everyone else in a medley. But before that Ryan Tubridy croons a Roger Miller song with Daniel, which, as the prophesies suggest, will certainly trigger Ragnarök. He wasn’t too bad, actually.

Nonetheless, kiss your loved ones and make your peace with whichever God you worship, the Late Late Country Special is over for another year.