Game of Thrones season eight, episode three: ‘I pumped my fists. I yelled at the screen’

Review: The extraordinary extended battle between living and dead was a masterpiece 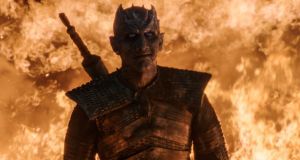 This review contains spoilers for season 8, episode three. (Really, don’t read it till you’ve watched it.)

It’s worth remembering, if it was possible to think about anything other than the extraordinary scenes unfolding, that there was once a major battle on Game of Thrones that the makers barely bothered to show.

Tyrion Lannister, knocked unconscious by one of his own soldiers, woke up to find his side victorious at the Battle of the Green Fork. This would have pleased nobody more than HBO’s accountants.

Compare that with this extended episode, coming midway through the show’s final season, on which no expense has been spared. Shot over the course of a month in Belfast, it has delivered a piece of television so full of spectacle, fight and flight, combat and horror, that it was unwise to blink over the course of a breathless 82 minutes. This might count as one of the most riveting battles ever filmed.

That owes something to the culmination of a storyline told over almost 10 years, with many narrative lessons learned along the way.

As with Tyrion Lannister’s knockout, writers David Benioff and DB Weiss and director Miguel Sapochnik know the opportunities within character perspectives. Awaiting the army of the dead, the camera follows the wary resolve of the living, from Sam Tarley, braving himself to fight, to courageous little Lyanna Mormont, calling the shots, to Tyrion, sliding reluctantly into the haven of the crypt.

Outside the battlements, we see a vast cavalry (the Dothraki), infantry (the Unsullied, Free Folk, assorted knights) and the airforce (Jon and Dany, ready to strafe the field with dragon fire). And what do they face?

Infinite darkness. A pitch-black void. Nothing.

After two episodes of anticipation, and an accumulated 10-years of character investment, the tension in this early sequence is nerve-fraying.

Who wouldn’t thrill, then, to see the Red Witch Melisandre make an unlikely reappearance to ignite the arakhs of the Dothraki? Watching their flaming scythes charging into the snow and burning through the darkness lifts everyone’s spirits. So who doesn’t feel their stomachs sink as each light is eerily snuffed out, every ululation silenced? It is beyond sinister, this strangled song of ice and fire.

That motif guides the episode, which charges between hope and despair. Like watching torches through a fog, the frame fills with ice and ash, recalling the confusion of ground battles as they are fought. The odds are impossible.

“We can’t beat them,” spits the Hound, for a moment as catatonic as a shell-shocked soldier. “We’re fighting death. You can’t beat death.”

But you can join them. One of the horrors of the episode, in fact, is to see the resurrecting powers of the Night King: dying in this battle means defecting to the other side.

“At least we’re already in a crypt,” quips Varys, huddled among the infirm and the children, and the first to chance a joke.

A grim Sansa gets a better one. “Maybe we should have stayed married,” Tyrion tells her.

“You were the best of them,” she says.

She may counsel him against wit, but at least it’s one sure sign of life.

It also breaks up the rhythm of the battle: even shock and awe become tiresome eventually, especially when stretched across innumerable bodies, invincible foes, even the give-them-what-they-want shots of dragons hurtling against each other in the night sky.

Through retreats, plan revisions, and the loss of significant characters, we end up in the claustrophobia of a horror movie, where the super-soldier Arya avoids prowling wights in the library.

These begin to feel like heroic last stands: the David and Goliath match between Lyanna and a zombie giant, pitting the smallest fighter against the largest, who cancel each other out; the derring-do of Beric, on what transpires to be his last life; or, rather movingly, Theon, defending Bran like a vulnerable chess piece, at the end of his redemptive arc.

“Everything you did brought you where you are now,” Bran assures him. “Where you belong. Home.”

Where does Jon belong, though? Is he a king, a knight or a pawn in this game? That he is not quite the hero of the episode feels significant. That Arya is feels rewarding. Like the impossibly romantic Ser Jorah, who dies defending his khaleesi, it isn’t Arya’s skills that define her as much as her spirit.

What do we say to the god of death, Melisandre asks her? Not today.

A sage bit of advice on Game of Thrones has always been “Stick them with the pointy end” – more dependable than any battle plan.

It’s a model of the show’s visual flair, its wise sweep from the Goliaths to the Lyannas of its storytelling, to see it executed now so perfectly on the Night King. I pumped my fists and yelled at the screen to watch him shatter.

What now? How was this not the series finale? Was the threat of annihilation just a B-plot? Is Cersei, still waiting in the wings, a greater foe than death itself?

We’ll worry about it later. Not today.