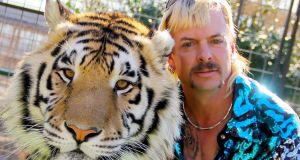 I think that the huge success of Netflix’s true crime exotic cat drama Tiger King is largely down to the fact that most of it takes place outside. In fact, if Netflix made a show simply called “Outside” I think it would go down very well right now. If you remove all the tigers and weirdos from this programme and just kept the drone shots of scrubland and lakes and horizons, I would probably still watch.

And yet, not only do we get to see “outside” in Tiger King but we get to meet Joe Exotic, a polygamous country-singing private zoo owner who is in a possibly murderous feud with another collector of exotic animals. Yes, he is a classic everyman. Well, I assume he’s an everyman. He’s certainly the only man I’ve seen in a while and when I watch, I think: He’s just like me! He has a head. I have a head! Joe Exotic has two arms and two legs. I have two arms and two legs (although a couple of Joe’s zookeepers, ominously, do not). Joe Exotic has jeans. I once wore jeans (full disclosure: I haven’t worn anything without an elasticated waist in a few weeks). Joe Exotic has loads of big cats. I have one small cat. Joe Exotic has several spouses. I have a spouse. He has a golden flowing mullet. I have a greying flowing mullet (a product of isolation, rather than a fashion choice, but still). He has a distant nemesis with whom he is weirdly obsessed. I have Dermot Bannon.

Before long I was calling myself Pat Exotic, Cat King of Marino and was planning to open a (very small) zoo on the internet (a Zoo-m if you will). Sadly, my cat is more unco-operative and violent than Joe Exotic’s menagerie of tigers and it was decided (by her) that this was a bad idea.

Joe Exotic – not one of the Kilcullen Exotics, I checked – is someone who has spent his life being a “character”. He has a throne and a bleached mullet and an internet television show and, in deference to a modern quirk of American life and in a boon to documentary-makers and police investigators, he films himself constantly. He has also spent his life collecting tigers, lions, leopards, young, handsome yet toothless men and gewgaws that he sells from his Tiger King gift shop. These include things like Tiger King BBQ sauce, Tiger King “sex gel” and the “Tiger King underwear line”. Tiger King himself doesn’t wear underwear. “I free-ball it,” he says, like a latter-day Wilde.

Joe Exotic is just one of the many people in this programme who have turned a love of leopardprint into a collection of large, man-eating animals (I know a few people on this slippery slope). His nemesis is Carole Baskin, a hippy with flowers in her hair who runs a rival institution called Big Cat Rescue and who believes Joe Exotic treats his animals cruelly. Carole seems lovely. Okay, her millionaire husband went missing in strange circumstances many years ago, but let’s not be prurient. She doesn’t like to talk about it. Joe not only talks about it, he makes country music videos in which a Carole-lookalike feeds a fake corpse to tigers and Joe picks up tiger poo in order to sing to us of how that’s all that’s left of her husband now (While making this video it is revealed that Joe uses actual tiger poo, which feels like unnecessary commitment to realism).

It doesn’t stop there. You wait years for just one deranged animal-collecting weirdo to come along and then a half dozen arrive at once. There’s “Doc” Antle, for example. He is a doctor of “mystical science” (lest you thought it was zoology, medicine or moral philosophy). He rides an elephant and has many, many wives. He says things like: “You can’t put a price on holding a baby tiger” even though he does put a price on holding a baby tiger. It’s literally his business.

There’s also a former drug lord named Mario who tells us how he got started in the exotic animal world. It feels surprisingly haphazard. A lion here, a monkey there, “the next thing I know I’ve a whole bunch of shit.” Yeah, it’s happened to the best of us. You’re impulse-buying a few ocelots on eBay and before you know it you’re living in a weird zoo surrounded by lions and men with guns.

Mario also did time in prison for his role in the killing and dismembering of a man, though the way he tells it, he was just helping a friend and it could have happened to anyone. Who hasn’t sleepwalked into owning a private zoo and/or helping to kill a drug informant? I think Jesus says this in his book, the Bible. Who knows? It’s been so long since I was outdoors that maybe this is what we were all at back in ancient early March.

As the episodes progress there are lawsuits, a failed political career, a mysterious explosion, a weird murder plot, a tragic death and the number of limbs people own changes. It’s not funny. It’s sad. The animals are badly treated. The zoo workers aren’t very well treated. The protagonists aren’t very well. This should be a story about the ethics of exploitation, but the filmmakers are enjoying themselves too much to dwell on things like poverty or cruelty or power dynamics. They’re too busy bombarding us with damaged people and their confusing feuds to worry about what any of it means.

If you think about it, it is they who are the exotic zookeepers and we are the punters in their crap zoo, feeling cheated and queasy and wondering why nothing looks like it does in the brochure. Tiger King is too nihilistically sensational for it to be anything other than depressing. The overly-familiar true crime storytelling techniques are now cheaper than a tiger cub in Oklahoma (shockingly cheap, as I learned from this programme).

Tantalising details are revealed, then ignored for episodes at a time. Key facts and wider context are withheld for greater shock value. Footage is played in slow motion with an ominous soundtrack. It’s surprisingly boring. We learn nothing about the human or feline condition (my cat didn’t even last one episode). On the other hand, as I mentioned already, there is a lot of footage of “outside”. So that’s nice, I suppose.

TV Guide: 29 of the best shows to watch this week
7

Plans lodged for demolition of The O’Rahilly house
10