Netflix: 10 of the best new shows and films to watch in May

Including Hollywood, The Love Birds, The Eddy and an Unbreakable Kimmy Schmidt special 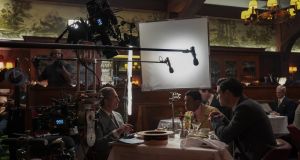 Hollywood: an ambitious, lavish look at the post-war film industry.

May 1st
The ever-prolific Ryan Murphy contemplates the history of showbusiness for his second Netflix offering. Hollywood is an ambitious, lavish look at the post-war film industry. The series is a fictionalised story about a group of aspiring actors and filmmakers who are determined not only to make their mark in Tinseltown but to provoke audiences, and disrupt the entire studio system. With a cast packed full of talent, including Darren Criss (The Assassination of Gianni Versace), the Big Bang Theory’s Jim Parsons, Holland Taylor and Patti LuPone, it mixes fact and fiction with real life icons like Noel Coward, Anna May Wong and Vivinne Leigh rubbing shoulders with the young cast of characters.

The wistful disillusionment at the cruelty of the industry that was so keenly observed in Murphy’s previous ode to Old Hollywood, Feud, is replaced by an idealism and optimism that sees the codes and practices of the movie business dismantled by these youthful pretenders. Hollywood is Murphy’s well-intentional attempt to rewrite history, to replace the prejudices and bigotry of the Golden Age of Hollywood with more modern sensibilities.

Dead to Me, season 2

May 8th
Following on from season one’s thrilling cliffhanger, the duo who redefine ‘ride or die’ friendships return to clean up the mess they’ve made. Jen and Judy must now deal with the consequences of their actions with their every move being observed, as the net closes in around them. As poignant and razor sharp as ever, Liz Feldmen’s pitch black, gallows-humour comedy showcases the range of actress Linda Cardellini and her criminally underrated co-star Christina Applegate whose depiction of the caustic, acerbic, anxiety-ridden Jen is an award worthy turn that deserves more attention.

Have a Good Trip: Adventures in Psychedelics

May 11th
Featuring stories from Adam Scott, Nick Offerman, Natasha Lyonne and Beastie Boy Adam Horowitz, Have a Good Trip is a comedic and investigative look at the lure and lore of psychedelics. Told through a mix of animation, interviews and reenactments, the documentary tackles topics such as the pros and cons of using psychedelics, an examination of their healing benefits, their place in pop culture and the science behind hallucinogens.

May 11th
This true-crime documentary series examines various historical trials where the modern media landscape helped to mold the public perception of certain cases and sometimes skewered their views regarding the guilt or innocence of particular individuals.

May 12th
Kimmy Schmidt makes a reappearance for this once-off interactive special where, just like Black Mirror’s Bandersnatch, viewers can influence how the storyline progresses as Kimmy (Ellie Kemper) plans her wedding to her British prince (Daniel Radcliffe). As the title suggests, Kimmy’s adventure also includes a confrontation with her kidnapper, the Reverend Dr. Richard Wayne Gary Wayne (John Hamm) who intimates that there may be another bunker of captured women out there yet to be discovered. Joining Kimmy on her cross-country quest are series regulars Titus Burgess, Jane Krakowski and Carol Kane.

May 15th
From the creator of the global sensation La Casa de Papel (Money Heist) comes the new crime series, White Lines. Set in Ibiza, Álex Pina’s latest drama tells the story of the disappearance and death of Manchester DJ Axel (Tom Rhys Harris) whose body is found 20 years after he went missing. His sister Zoe (Laura Haddock) returns to the island and enlists the help of Axel’s best friend, played by Line of Duty’s Daniel Mays, in an attempt to disclose the circumstances of her brother’s demise, believing that it may have been murder.  What follows is a surreal trip through drug-fuelled parties, sex clubs, encounters with corrupt cops and a subterranean community of criminals, as Zoe faces her own demons whilst excavating the past. With episodes directed by La Casa de Papel’s Luis Prieto and Northern Irish filmmaker Nick Hamm, it’s an intoxicating, adrenaline-fuelled ride full of elaborate set pieces and stunning scenery.

May 22nd
Snatched up by Netflix after its theatrical release was scuppered by Covid-19, The Lovebirds is a romantic comedy caper starring Insecure’s Issa Rae and The Big Sick’s Kumali Nanijani as the lovers in question.

Directed by comedy writer and actor Michael Showalter (The Big Sick) the film, with shades of Shawn Levy’s Date Night, centres around a couple who accidentally become embroiled in a murder mystery. As they endeavour to clear their names and hunt down the killer, they encounter various shady characters and wind up in extreme scenarios that put their relationship to the test.

May 26th
Almost two years since her unforgettable comedy special Nanette hit Netflix, Hannah Gadsby returns with her new show Douglas (named after her dog). As with her previous work it’s a blazingly intelligent dissection of patriarchal society by way of art history, philosophy and anecdotes. Pushing the boundaries of the restrictive stand-up medium by introducing sections that are presented in a lecture format or a monologue, Gadsby’s innovative style is a breath of fresh air in an industry that still glorifies the mediocre offerings of the stale, pale, male variety.

Britain and Europe in a Troubled World: A wise guide to Brexit
4