Gangs of London: They bump off Colm Meaney in minutes. It’s a national disgrace 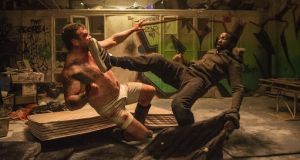 Gangs of London: May I have the pleasure of the next dance?

National treasure Colm Meaney stars in the new TV series Gangs of London, which starts this week on Sky Atlantic (every Thursday, but all episodes are available to watch on Now TV). His head is the most Irish of heads, as Irish as red lemonade or Supermac’s or myopic localism or melancholy or saying “Howya horse?” to the guard who is about to breathalyse you. I stand up, salute and start singing the national anthem whenever I see the head of Colm Meaney.

Sadly, he is only in Gangs of London mere minutes before that head is ventilated by a youthful assassin and he lies choking in his own blood. What a swizz. As a fan of The Meaney I am appalled. Initially I assumed they would Weekend at Bernie him as a charismatic corpse throughout the remains of this 10-part series. And, in a way, they do. His character, the mob boss Finn Wallace, overshadows the whole story and turns up in ominous flashbacks wherein he gnaws on the scenery greedily as though it were a delicious Cadbury’s Chomp.

While Gangs of London has some spectacular ultraviolence, there’s also a lot of talking. I know! What is this, Mass?

Gangs of London comes from Gareth Evans, director of the amazing Indonesian film The Raid, which was essentially one long violent trailer. Sadly for fans of such things, while Gangs of London has some spectacular ultraviolence, there’s also a lot of talking. I know! What is this, Mass? If we wanted to hear talking we’d spend time with our housebound families. Luckily, the plot is of the familiar sort wherein you don’t really have to think too much.

The central family includes a steely matriarch (the brilliant Michelle Fairley), a Fredo-esque drug addict and a doctor intent on having nothing to do with the family business. Then there’s the heir apparent, Sean, played by stretched child Joe Cole. He’s a frowny sociopath who wishes to test the loyalty of his father’s business colleagues by setting people on fire and organising massacres. These colleagues are rival gangs from all over the world (fictional street gangs are a useful remote-teaching tool for quarantining geography teachers) and they meet at the Wallace homestead to pay tribute to Joe Cole, much as I expect the editors of all the main Irish media outlets will pay tribute to my heirs when my time comes. Many of the winningly international mob bosses get an opportunity to perpetuate particularly creative acts of vicious violence. Some of this is loopily grim, involving people being broiled alive or drowned in wet concrete or de-brained by a bolt gun. I mean, there have to be easier ways to kill people.

Sean is set up as a suitably dead-eyed antihero, but the “hero” is a glowering fightyman named Elliot (Sope Dìrísù). Unlike his cinematic namesake, Elliot does not develop a beautiful spiritual bond with a Jesus-like alien, but instead forms a beautiful spiritual bond with a sociopathic mob boss. Elliot is a hired goon, a profession so omnipresent on TV crime dramas that I feel it should be on the CAO form (“If I don’t get Goonery in NUIG, I’m hoping for Stoogistry in Maynooth”). He wanders around stabbing holes in people and making their limbs less straight while sporadically looking sad, for he has a tragic past. (There was definitely a production note at some point that read: “Stick a dead wife in there, Gareth”.) Most of each episode – I’ve watched four of them – simply exists to give narrative context to the beautifully choreographed acts of ultraviolence. These are as regular as the 123 bus.

This week, for example, Elliot goes into a pub only to be set upon by violent Albanians angry about mob crime, the Eurovision song contest and lazy stereotyping, probably. He stabs, he gouges, he cripples and maims. He snaps limbs, lacerates faces with pint glasses and slices arteries with a dart he’s grabbed from a dartboard. It makes me think. I think: “God, it would be lovely to be in a pub. It’s been ages since I’ve been in a pub.”

Then I think: “One singular sensation, every single step she takes! One thrilling combination, every move that she maaaaakes…” Because there’s more choreography in one of Gareth Evans’s fight scenes than in all of A Chorus Line, and if you ignore the crunch of bones, the squelch of flesh and the gush of bodily fluids, Elliot is basically doing a lovely dance. He gets some of the best lines, too. When someone notes how unlikely it is that he single-handedly took out eight men in a pub, he grunts, “I ’ad a dart.”

There are, of course, a few twists over the course of the tense first episodes. I won’t spoil them here, but suffice it to say these are the types of twists that only someone who has never watched television before or genuinely thinks this is what fighting looks like will have trouble foreseeing. Finn Wallace had a secret. No! A key character is an undercover policeman. Whaaat? A trusted colleague is engaged in betrayal. Never! Are you saying we can’t even trust violent mob bosses to be straight with us in this blighted age?

What drives the narrative for Sean, Elliot and the grieving nation of Ireland is finding the identity of whoever killed Colm Meaney and uncovering that great Irishman’s ominous secrets. In a sense this show could be called Man’s Search for Meaney, such is the power of his spectral character.

There is nothing new in the plot, tropes or stock types you’ll find in Gangs of London, but they’re rarely executed with such stylishly gruesome panache

Well, it’s not going to be that easy. When Elliot finally tracks two young gunmen to a disused factory, he finds, among other things, a corpse dismembered in a bath and a huge filth-soaked man in underpants and wellies. I know that this isn’t unusual these days – it’s week five in a lockdown. But this programme was made in an era when people got dressed in the morning. Elliot quickly determines that this is a strange, unstable man and not just someone who’s been trying to home-school his kids while Zoom conferencing the office. The filth-soaked underpants man runs at Elliot with a cleaver and the duo pirouette and spin and mutilate each other in a graceful lather of blood spray and grunting (“One singular sensation!” I sing again). There is nothing new in the plot, tropes or stock types you’ll find in Gangs of London, but they’re rarely executed with such stylishly gruesome panache. It is quite enjoyable, if you are a fan of the musical arts.