What are the best pantomimes this Christmas?

Here’s our first look reviews at the early season shows 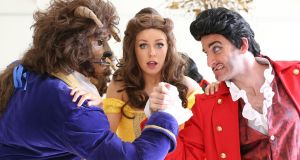 Beauty and the Beast
Helix Theatre, Dublin
★★★
Something strange is afoot in Merryville. Belle (Orla Jennings) has gone missing and her faux-beau Gaston (Paul Byrom) is determined to do something about: suck in his cheeks and strut into rebellion. In this 10th anniversary production from TheatreWorx, there is no mistaking who is the real baddie of this classic fairytale.

It is certainly not the Beast (Chris Corroon), who doesn’t even make an appearance until the final scene of Act One. And it’s not the dimwitted Gastoff (played with gormless relish by Aidan Mannion). No, the number one villain is the vainglorious Gaston, a Kardashian-lookalike in ridiculously tight breeches, who has eyebrows as sturdy as shelves. The costume and make-up team (led by Rita Tighe) spare him no expense (or dignity), and they provide lavish wardrobes in lurid luminosity for all of the main characters, as well as some stunning uniforms for the ensemble in the choreographed set pieces.

The script by Claire Tighe and Karl Harpur takes its brief from Disney, and is happy to inhabit the realm of fairytale (there is only the most cursory reference to current affairs). They have great fun updating the story to reflect contemporary cultural concerns, however, scoring a massive coup with their reinvention of the enchanted furniture, staging a love affair between Lu Minous (Rachel O’Connell, whose thick Corkonion drawl cuts through any glamour) and a besotted French remote-control Flick (James Deegan). Their love scene, which involves multiple playback settings, is worth the ticket price alone. It is just a pity that the main plot-line doesn’t sing with the same hilarity. After all, happy ever afters are just not as interesting as disasters. Until January 21st
Sara Keating

Snow White and the Seven Dwarfs
Cork Opera House
★★★★★
A cavalcade of glittering highlights during this Opera House presentation cannot disguise the fact that the best moment of all comes with Frank Mackey’s impersonation of a frog climbing a rock.

There’s no point in wondering what a frog might have to do with the narrative of this fairytale; suspension of disbelief is taken for granted by co-writers Mackey and Trevor Ryan and their faith in the youthful and responsive audience is happily justified. So is their trust in the performers led by Shirley McCarthy as wicked stepmother Sadista, Phoebe Dipple as Snow White, Adam Colbert-Dunn as Muddles, and Joseph Connor as the Prince, who sings, skates and cartwheels his way through the script. Muddles delivers Christmas cracker jokes as if they are new-minted, an exuberant Snow White remains undaunted by the schemes of the superbly murderous Sadista, and Mackey himself bounces with ebullient ease through rapid scenes and costume changes as Nanny Nellie.

Although there is an amplification imbalance between the live music and singing and the dominating backing tracks, all other technical, wardrobe and choreographic elements contribute smoothly to the constantly entertaining visual impact. Drew McCarthy’s lighting, Ciaran Connolly and Tara O’Halloran’s dancers, and Ronan Holohan’s music swirl through shreds and patches from La La Land to Wicked, and Joan Hickson’s costumes contribute especially to the transformation of queen to crone in an aerial splendour of black and crimson. It hardly needs to be noticed that not since Adam and Eve has an apple deserved such uproarious disapproval as in this pantomime but it does need to be suggested that director Trevor Ryan might gamble on offering a flatulent-free approach as a future challenge.

In the meantime, when the rhythms and dazzle of the dancing on stage excite an enraptured dancing in the aisles he and his team deserve full credit for achieving such a transfer of joy. Runs until January 21st
Mary Leland

Jack and the Beanstalk
Millennium Forum, Derry
★★★★
As befits a theatre built on the ancient city walls, there is a real sense of ownership about the annual Christmas pantomime in Derry’s Millennium Forum. From the stalls to the stage, from William Caulfield’s gossipy dame to the supple little performers of the Rainbow School of Dance, there’s a real shared sense of fun and camaraderie, of everyone being in this together.

Writer and producer David McLaughlin has come up with an entertaining, script, which colourfully tells the story of impoverished widow Dame Trott, her sons Jack and Billy, a quivering king, his wide-eyed daughter, a lovable cow and a thundering, avaricious giant who threatens their very existence from his lair at the top of a beanstalk.

In the second act, he makes a spectacular, towering appearance, to the delight of all. The moral tussle is nicely launched through the verse interventions of Orla Mullan’s do-gooding Fairy Rose Petal and James Lecky’s vampiric Flesh Creep. Jonathan Burgess directs with real chutzpah and, to the accompaniment of Alan Wright’s catchy live music, the storyline zips along at a pace. In this city, whose inhabitants live and breathe politics, sideways quips about MLAs, Stormont and Sinn Féin are greeted with laughter and catcalls.

The old hands in the cast have lost none of their expertise or enthusiasm for the task in hand. Stand-up comedian Caulfield has a nicely judged, gentle touch about his engagement with the audience, while Conor O’Kane is a bouncy, not very bright and extremely silly Billy, adored by the kids who greet his every appearance with deafening proof of their membership of his gang. Runs until December 31st
Jane Coyle

Sleeping Beauty
Waterfront Hall, Belfast
★★★
There’s something about an honest-to-goodness, traditional Christmas panto that remains hard to resist. When the evergreen fairytale of Sleeping Beauty is presented, more or less intact, with a few modern embellishments and an affordable price tag, it’s easy to see why the annual Waterfront Hall shout fest is such a popular staple in many family and schools calendars.

Director Lisa May and writer PJ O’Reilly have adhered to the tried and tested formula of giving audiences what they like and know. Unusually, the storyline has been built not around the saccharine sweetness of Princess Beauty and the soppy Prince, whose kiss wakes her from a century-long slumber, but around Gary Crossan’s thoroughly nasty Maleficent, an effective alternative to the evil fairy whom the young audience hate on sight.

Eventually, the action leads back to the central dilemma of the slumbering Princess Beauty (Jolene O’Hara). Gavin Peden’s diminutive, squeaky voiced Prince Harry Smiles’s chances of reawakening her appear extremely slim, especially when he finds himself banged up behind bars in the unlikely company of Hansel, Snow White and Cinderella. A madcap chase through the auditorium cranks up the hysteria level before order is restored with the demise of Maleficent, the destruction of his malign intentions and the kiss that puts it all to rights. Runs until January 7th
Jane Coyle

The Grimm Tale of Cinderella
Smock Alley Theatre
★★
There is plenty of fairytale but not a lot of fun in this retelling of the popular princess tale, which eschews the Disney version for a tale of origins. Katie McCann’s retelling offers a framing device instead, introducing the Grimm brothers, Jacob (Fionn Foley) and Wilhelm (Finbarr Doyle), as they make their way to Hamburg with the final draft of their soon-to-be published collection of folk tales. However, they are intercepted by a strange old woman, who holds one final story close to her heart. Call her Cendrillion, Aschenputtel, Sooty Face – but don’t call her princess.

Danielle Galligan gives us an appealing heroine. She may be motherless but she is not rudderless: she has a moral centre that anchors her even in adversity. It is certainly tested by her new stepmother (Camille Lucy Ross) and her two vain daughters (Aisling O’Meara and Ashleigh Dorell). Pitched at a 6+ audience, the central narrative of McCann’s version will be of more interest to tweens and teens, who will appreciate the bitchy back-and-forth of this domestic drama.

In a not-so-far-away kingdom, meanwhile, the feckless crown prince is hoping to be married. Director Jeda de Brí uses some effective doubling to make use of his ensemble, and Foley, in particular, is memorable as the hunchbacked servant Otto, and Cinders’ love-interest-in-waiting, Kit. Indeed, he is in both of the standout scenes, where Cinderella gets to practice her ninja-skills.

Unfortunately, the rest of the play is more talk than action. We get lots of story but not enough plot. Smock Alley’s Christmas endeavour is a welcome addition to the seasonal repertoire, offering traditional drama in contrast to the pop-culture mash-ups elsewhere. But there’s just not enough life in this production to compete with the cross-dressing chaos of the pantos down the road. Until December 22nd
Sara Keating