In this weeks’s theatre, a frightful creature becomes a useful friend, an old fable is laced up to fit new times, and one eccentric Dubliner finally becomes a legend 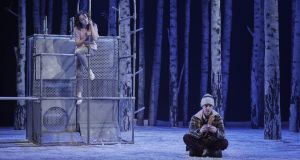 Eli and Oscar in ‘Let the Right One In’

Let The Right One In

“Be safe, kid,” the young Oskar is cautioned before heading out alone into the dark and snowy woods. There is reason to be afraid: the trees may be concealing school bullies, or, even worse, dead bodies mysteriously drained of their blood. So when this sensitive boy meets a preternatural, icy young girl called Eli, is their hesitant relationship the making of a fairy tale or a horror story?

In Jack Thorne’s sparing stage adaptation of John Ajvide Lindqvist’s spectral novel and screenplay, it’s a bit of both, given a sparing beauty by director John Tiffany for the National Theatre of Scotland production. The Irish staging lightly inscribes its own identity, chiefly through the leads Craig Connolly and Katie Honan. Most enthralling is the black magic combination of tenderness and brutality in this story of loneliness, love and co-dependence; the blood and snow of a winter chill.

In the Gate’s darkly spectacular Christmas show, The Red Shoes, a boldly new production tries on an old fairytale for size. Hans Christian Anderson’s fable was always a cautionary tale about the dazzling sin of decadence – allowing its orphan to dance in enchanted red shoes before punishing her religiously for it. Those shoes won’t quite fit, recognises Nancy Harris’s much more forgiving and knowing new version. In a timeless pop-up book version of Ireland, Stephanie Dufresne’s mute Karen is taken in by ghastly Dublin relatives, but introduced to a pair of ruby-red pumps that Dorothy might have killed for once again. When she dances, ribbons of colour and subversive motion ripple through a succession of striking stage pictures. Like her, Selina Cartmell’s production takes a while to find its feet, but its wit and movement indulge the original fairytale while still dancing free from it.

Can an out-of-the-ordinary Dubliner with a tragic past and a vivid imagination finally become a legend? On the evidence of Bang Bang, a new play by Dermot Bolger based on the life of one eccentric city character from the 1950s and ’60s, the signs are promising. Bang Bang was a man who frequented the busses of the capital while a Western movie unfurled in his mind. He would hold a huge brass key in his hand, his Colt 45, and call “Bang Bang” to bemused and entertained passengers, as though in a quick draw. In Bolger’s play, performed by Pat McGrath and directed by Mark O’Brien, Bang Bang now finds himself in Dublin’s Home for the Blind, facing the last Christmas of his life and preparing for his final showdown in Dodge City.

A hurley as a sex toy? Ah would you camán out of that?