Thirst (and Other Bits of Flann) review: Nostalgia, booze and tale tales 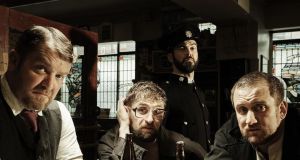 Thirst (and Other Bits of Flann): a very merry, nostalgic study in character

THIRST (AND OTHER BITS OF FLANN)

Peacock stage, Abbey Theatre, Dublin
★★★☆☆
Admirers of the comic imagination of Flann O’Brien, or Myles na gCopaleen (or, indeed, both), can never be quite sure how big a role drink played in his inventiveness.

Frequently a minor character in his writing, but sometimes its main subject, was alcohol just a lubricant to make his ludic imagination seem so strangely lucid? Or did Brian O’Nolan, the restless civil servant behind countless identities, use the stuff to douse a blazing mind, and finally to pickle it? In short, what is the more intoxicating thing about him?

Any performance that concludes with Thirst, a short sketch and long shaggy-dog story commissioned in 1948 by the Gate Theatre, is likely to take a more sentimental view.

With performers of this calibre the production makes for a diverting hour, but one that cries out for a staging idea worthy of Flann O’Brien’s subversive imagination

Agro Grimace, a new company that is a breakaway faction of Druid’s ensemble comprising Garrett Lombard, Aaron Monaghan, Rory Nolan and Marty Rea, has carefully assembled a few choice snippets of O’Brien’s writing, drawn from novels and columns. These offer a sample of O’Brien’s loquacious pleasures, beginning with the pleasingly earnest appearance of Rea as a ramrod-straight police sergeant, to explain again The Third Policeman’s alarming theory of molecular transfer: “You would be surprised at the number of people in these parts who nearly are half people and half bicycles.”

That might initiate a revue of O’Brien’s absorbing vision of Irish absurdity – as these are the same actors behind Druid’s recent and masterful production of Waiting for Godot, it also hints at a subversive connection – but even here, quite against his character, the sergeant has some drink taken. When Rory Nolan appears in an ensuing vignette, as the shambling reporter of Drink and Time in Dublin, whittled down to a comic monologue of mind-bending misadventure, the theme seems to narrow to the width of a bottleneck.

By the time Monaghan arrives, hunched over a newspaper in thick spectacles and tobacco-stained ties, to explain (by way of O’Brien’s comically sombre reflections on booze, The Trade in Dublin) the outlandish tale of how he came to live in digs again, the show seems to effect a molecular transfer of its own: half bar, half show.

Operating with neither a credited director nor a designer (apart from Ciara Fleming, who created the costumes), in a space clustered with parlour tables and beer mats, that can create the appearance of an actors’ lock-in: a very merry, nostalgic study in character, where reality is distended by booze and credulous listeners can be codded by very tall tales.

With performers of this calibre that makes for a diverting hour, but one that cries out for a staging idea worthy of O’Brien’s subversive imagination. That might have seized from the writing, as O’Nolan once put it, “any amount of scope for backchat and funny cracks”. Instead, like Lombard’s wily publican, describing his arid time in the desert in invitingly parched tones, it counsels us to drink and be merry.

That, indeed, is part of Flann’s appeal. But please enjoy Thirst responsibly.