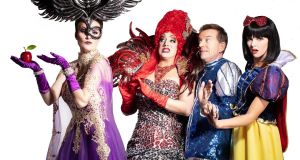 At any other point in the year, a radical reinterpretation of a classic text with a liberal amount of audience participation would be enough to strike terror in the hearts of theatre goers. At Christmas, though, we call this pantomime.

For many kids, this is an introduction to live performance and there will always be relatively new arrivals to the world who don’t know how things pan out for Snow White.

There are many more of us who never suspected – before Alan Hughes and Karl Broderick told us otherwise – that they required the assistance of ravenous pantomime dame Buffy and a character called Sammy Sausages. These may be rare additions in panto, a form so lacquered in ritual and repetition that its only rival for unaltered spectacle may be the Latin mass (a form similarly fond of men in frocks).

This year’s Tivoli pantomime, the venue’s swan song, is a cheering blend of tradition and topical gags. Without spoiling the plot of the new production from director Sean Gilligan, it may still involve a comely maiden, seven small protectors with big personalities, and one celebrity-voiced magic mirror. Performed by Keila-Ana Whelan, Emily Carroll, Karl Bowe and X-Factor sensation Mary Byrne, with Rob Murphy as Buffy and Alan Hughes as Sammy, and Joe Duffy’s image as the mirror, you ought to see some surprising things in it.
panto.ie

The Snow Queen
Gaiety Theatre, Dublin
Until Jan 20
Fairy tales get told so many times, with revisions and additions, that eventually they become completely transformed. Either they’re edited and censored, declawed to allow for the morals of the times, or streamlined by Disney into a non-negotiable package. Put simply, how do you enthuse small children with Hans Christian Andersen’s story of The Snow Queen – another tale of an enchanted mirror that has comes to distort the chilly earth – when all they really want is Disney’s Frozen?

The answer, supplied by Daryn Crosbie, the writer, director and choreographer entrusted with the Gaiety’s enduring pantomime, is to give them both. This version combines the traditional architecture of the tale with every contemporary embellishment, matching the fearsome Snow Queen (Louise Bowden) with valiant pantomime dame Granny Hurdy-Gurdy (Joe Conlan), the enchantress’s stylish foil at Christmas time.

The spectacle cleaves closer to a musical, full of numbers and motion, the humour hugs the headlines, taking cues from gender politics and Brexit, and the Gaiety theatre itself, that grand old chocolate box, is transformed into a winter wonderland where snow blizzards might dance into the audience. But don’t let the ice effect fool you. This pantomime is out to warm your heart.
gaiety theatre.ie