The Numbered review: an interrogation of our futile anxiety over death 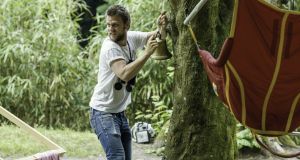 It was some small point of comment at the end of Corcadorca’s presentation of The Numbered as part of the Cork Midsummer Festival on Monday night that the laden programme contained no word about the play itself.

Its author, Elias Canetti, appears in the credits only as part of the creative team led by director Pat Kiernan. This company has a justifiable faith in its audiences but in this case there might have been a little closer examination of Canetti’s brief speculation born surely from his own experience.

Narrow but not shallow like the river bordering the park’s greensward, the proposition is that life without certainty is a life lived in fear. Here, however, the narrowness remains but the depth isn’t reached.

The members of the little community living in the shrine-like kiosks of the set by Aedin Cosgrove and Paul Keogan and illuminated with click-smart timing by their lighting design are identified only by numbers, as with, a concentration camp or, God help us, Ireland’s industrial orphanages of not long ago at all.

The numbers signify the years until one’s death which is already fixed and immutable: 96 is described as a very good name. Each character bears a locket like a votive candle beating against the heartbeat; each one accepts the omniscient word of The Keeper.

The argument depends on a single blasphemer resisting the edict that in law only one thing matters – that laws should be obeyed by everyone within the jurisdiction. Perhaps this Trump-era resonance explains Mel Mercier’s portentous scoring, its annunciatory cannonades predicting nothing much. But it’s a balmy evening, the park’s modernistic bandstand an attractive staging, the long windows of Sundays Well glimmer through the trees thronging the other shore, and the strong cast works hard to convey this interrogation of humanity’s futile anxiety to know our end, and the measure of our days.