The Cripple of Inishmaan review: Outlandish tales and dark distortions 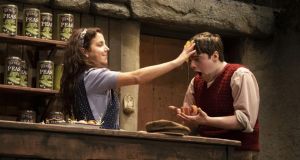 THE CRIPPLE OF INISHMAAN

Gaiety Theatre, Dublin
★★★☆☆
Stories are a volatile currency in Martin McDonagh’s jagged comedy from 1996. On the impossibly stultifying island of Inishmaan, in 1934, they can be traded for food, like the “three bits of news” that the local gossipmonger, Johnnypateenmike (Phelim Drew), uses to pay for groceries.

Other stories are like unsolved mysteries, with values to be preserved or challenged, such as the tale of how the parents of Cripple Billy (Ruairí Heading) died many years before, leaving the young man in the aggressive care of two spinster shopkeepers.

And stories are also prone to wild distortion, twisted into outlandish shapes by mythmakers like Robert Flaherty’s film Man of Aran, the documentary that both immortalised and sensationalised Ireland’s harsh west coast.

There has always been a stab of self-reference in bringing Flaherty’s work into a McDonagh play, whose own representations of rugged Irish life imagine startling figures in a dirt-simple world. “Ireland mustn’t be such a bad place, so, if the Yanks want to come here to do their filming,” one character reasons.

McDonagh’s Ireland, though, is a very bad place, snickering and mean, where naive boys spend their time gazing at cows, violent girls pelt eggs at everything, and abuse is a casual pastime. “Poor Billy will never be getting kissed,” Eileen (Norma Sheahan), one of his adoptive aunts, says to Kate (Catherine Walsh), the other. “Unless it was be a blind girl.”

The production’s director, Andrew Flynn – McDonagh’s foremost and most regular interpreter after Garry Hynes of Druid – has, happily, found new ways to accommodate these plays: not within a hardening septic realism but, working with the imaginative designer Owen MacCarthaigh, against a fittingly exaggerated landscape.

Like the ethos of the storytellers, bigger is always better in their stagecraft, but somehow the effect can be just as weightless. On the Gaiety stage a rugged cliff face peels open as easily as a greetings card to reveal the aunties’ thatched shop inside, where tinned peas climb absurdly high and smoke curls down from the chimney as thick as God’s beard. This tale has grown in the telling.

To those who otherwise find it difficult to invest in McDonagh’s work, where characters are as blunt and childish as in a pierside puppet show and nobody has sufficient wit to be a hypocrite, that makes things more palatable.

Walsh and Sheahan make a terrific double act, a sliver away from music hall, leaning into the preposterousness. Drew makes of Johnnypateenmike a kind of ham Synge performance, stentorian and severe, nicely aware of the stage Irishisms within this postmodern blender, just as John Olohan’s sprung postures as a remonstrating doctor have a melodramatic echo of Boucicault. With Rosaleen Linehan amplifying the comedy of Johnnypateenmike’s “drunken” mammy, there’s a cheering sense from the supporting cast that they know where all of this is coming from.

If the protagonists aren’t quite so assured, it may be because the script gives them so little to work with. Heading, convincingly lame as Billy, defends himself artlessly from outrageous island abuse while nursing quiet ambitions of escape to international stardom. Jamie Lee O’Donnell, as his tormentor and crush, Slippy Helen, strives to put brio in her character’s acid indifference, and Ian O’Reilly, as her obtuse and obsessive brother, Bartley, pursues an unwavering line in camp indignation.

If the characters are inflexibly one-note, the plot is a corkscrew of twists, a hallmark of juvenilia. Is the hopeful, wheezing Billy nearing his end from tuberculosis or not? Who among these rancourous islanders will finally be revealed as saints or sharks?

All these ceaseless and depthless reversals eventually make the time drag worse than Billy’s foot. But, like the fetchingly goofy embellishments of Flynn’s stage, or the pleasing jazz-trad confection of Carl Kennedy’s mid-Atlantic score, there are still some spry ways to fill it.