Directing a Martin McDonagh play? It’s the stuff of dreams

The challenge is to honour his writing. When the cast find the rhythm, the work sings 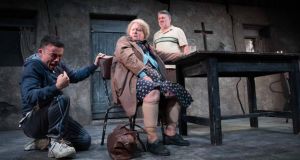 Thumbing was something I had mastered during my college years, but on this particular winter morning getting an early lift was essential, I was moving to Galway to commence a three-month internship with Druid Theatre.

As I boarded the waiting milk lorry, I had no idea that the months to follow would have such a life changing effect on me.

In 1996, I was an ambitious young man with a desire or perhaps more a dream to become a theatre director.

Martin was determined that he would succeed, that his writing would be produced. Despite often harsh and cruel rejections,  he persisted

Having grown up in a small Tipperary town this notion was still considered by most people in my sphere as a crazy career move, and nothing more than a pipe dream.

As I arrived at Chapel Lane, I met a young grey haired man who greeted me with a smile and spoke in a soft London accent. He was friendly and curious about why I was at Druid.

I went on to tell him that I was about to start work on a new play called The Beauty Queen of Leenane. “Is it any good?” he asked. To which I answered, “It’s brilliant.” He smiled. “That’s good,” he said. “I’m Martin McDonagh.”

Over the next three months I immersed myself anywhere I could. I helped the scenic artist, Adam Cutts, searched for props with the late Bernie Walsh. I worked on lighting, sets, costume and special effects but where I was most comfortable was observing Anna Manahan, Marie Mullen, Brian F O’Byrne, Tom Murphy and Garry Hynes breathe such brilliant life into Martin’s words.

I also played soccer, a lot of soccer, with Martin. I was a young intern who was welcomed into Druid and its creative process. My new colleagues had turned their own pipe dreams into reality.

Suddenly, the notion of becoming a theatre director didn’t seem so crazy.

When I reflect now on that time I can see, that what I learned most from the Beauty Queen internship was to be determined. I was truly inspired by all the people I met and worked with, particularly Martin. Here, was a young man who wanted to write.

He was determined that he would succeed, that his writing would be produced, and – despite often harsh and cruel rejections – Martin persisted. By March, and the end of that first Beauty Queen production, I knew I had to become a theatre director.

Following my internship, I worked as a stage manager on the Leenane Trilogy, touring A Skull In Connemara and Beauty Queen throughout the country.

In 2000, I became an assistant director at Druid. I got to rehearse two new actors into the Druid production of Beauty Queen, that the Royal Court was touring throughout Ireland and the UK.

This process afforded me the opportunity to work directly with Anna Manahan, Kate Burton, Rúaidhrí Conroy and Peter Gowen and of course, Martin.

This process was very hands-on and I discovered that I simply loved directing Martin’s plays.

For a director, the script is central to the process. Martin’s plays are brilliantly crafted, his language is rhythmic and the huge challenge for the actor/director is to honour that unique rhythm.

No pause, beat, comma or full-stop is out of place. When the cast find the rhythm the work sings and it’s hugely rewarding.

McDonagh’s characters provide a challenge. they are steeped in reality, we all know people who exist like them, but in Martin’s hands he stretches this realism into a heightened cartoonish world. The landscape is dark, very dark, yet comedy, tragedy, tenderness all exist in a McDonagh character and play.

Martin’s work brings an audience in, they become involved in the play, and, as the multiple plots of his work twist and turn, the audience will laugh, laugh a lot! But equally gasp and squirm and look away in disbelief.

In 2001, I set about developing my own work and career. I established a professional company, Decadent Theatre, and worked to develop and hone my directing skills.

Collectively, we are currently battling hard to master his wonderful rhythm

In 2006, with support from Galway Townhall, Cork Opera House and Millennium Forum Derry, I approached Martin with the desire to stage the first Irish production of his second Island play, The Lieutenant of Inishmore. Martin trusted me.

The production was a large scale one with huge technical challenges but it received excellent reviews and went on to play for two national tours. In 2009 the same producing partners commissioned a new touring production of The Lonesome West.

In 2013, Decadent produced a large scale production of A Skull In Connemara. This production garnered excellent reviews and has gone on to tour with varying casts in 2013, 2014 and most recently in 2018 with Pat Shortt taking on the role of Mick Dowd.

In 2015, I was trusted with the Irish premiere of Martin’s most controversial play, The Pillowman. This play had always fascinated me. I had first learned about it while working as a stage manager on an Island tour of Beauty Queen.

The play saw Martin move away from the rural west of Ireland landscape he had become famous for. The Pillowman was set in a police interrogation room in a totalitarian state.

A young writer is being interrogated for the gruesome content of his short stories. Like all of his work, The Pillowman is at its heart very dark, but is equally very brilliant and extremely funny.

The production was a huge creative collaboration with nine actors and huge production team. The process was very special and sharing a rehearsal room with Martin was incredible.

Martin is an amazing director and his notes, in my experience, are always spot on. The production garnered excellent reviews, attendances and has since enjoyed two national tours and two runs at the Gaiety theatre.

Now, in January 2019, 23 years after meeting Martin McDonagh, I have the honour to collaborate on a new production of one of his earliest plays, The Cripple of Inishmaan for Gaiety Productions.

Once again, I’m experiencing the same thrill that has always emerged when working on a Martin McDonagh play. The cast and production team are proving brilliant and generous collaborators.

Collectively, we are currently battling hard to master his wonderful rhythm. We are working tirelessly to realise this wild island landscape and to populate it with Martin’s eccentric and odd characters.

For me, directing a Martin McDonagh play remains the stuff of dreams.

Andrew Flynn is directing the Gaiety Theatre’s production of Martin McDonagh’s The Cripple of Inishmaan, which opens on January 25th