Gary Barlow: ‘It’s different now. You don’t get people outside your house’ 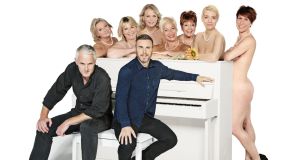 As stories go, Calendar Girls has much more going on than first meets the eye. The tale of a group of menopausal, occasionally repressed Women’s Institute (WI) members posing naked for a charity calendar boasts the classic fish out of water comedy premise, not to mention the personal transformations of a gutsy cohort of Yorkshire lasses. More than that, there’s the murky plunge for one of its members into terminal illness and grief when her husband dies of non-Hodgkin’s Lymphoma, and her eventual journey back towards the light. Little wonder that the film (starring Helen Mirren and Julie Walters) was a sleeper hit in 2003, spawning a successful adaptation for the stage in 2008.

As the writer of both the film and the original play, Tim Firth went one further in 2016, by creating Calendar Girls: The Musical. It may sound like the very definition of overkill – a movie, followed by a stage play, followed by a musical. Yet Firth’s musical is a different beast to the original stage adaptation, and in some quarters, deemed even more vibrant and uplifting than its predecessors.

“My first love is musical theatre, and after the movie and play were done and dusted, I thought, ‘hold on a minute, there’s a final way of telling the story for the stage’,” explains Firth. “The reason I wrote it as a musical was because there was something there that the play did not offer.”

The musical – starring Fern Britton, Denise Welch, Rebecca Storm and Ruth Madoc – is a bewitching tango of light and shade, flitting from uproarious, benign titillation to genuine pathos. It’s a tricky enough balance but Firth has managed it, with a little help from Take That’s Gary Barlow. The two share a long and intriguing history: they both grew up in a small town called Frodsham in Cheshire. Firth was the one destined to leave Frodsham for great things in showbiz. Before studying at Cambridge, he collaborated in workshops with dramatist/composer Willy Russell. By the time he reached Cambridge’s Footlights dramatic club, he counted David Baddiel and Sam Mendes as collaborators.

At 15, Gary Barlow, then an unknown fifth former, entered a BBC songwriting competition called A Song for Christmas with a Barry Manilow-influenced song, Let’s Pray for Christmas. Firth (19) was one of the judges on it, and the two soon happened upon their shared background. Bonding over the local butchers lead to a long friendship.

“He told me about having this audition for this band and I thought, ‘well, that’ll last 15 minutes, have a great time’,” says Firth. “Lo and behold, the next time I see him is at the Apollo in Manchester. Suddenly, the guy from your hometown is up there with 6,000 girls screaming at him.”

Barlow, of course, ended up as the creative force in Take That, the monumentally successful boyband that broke a million young hearts when they wound down in 1996, but went on to an impressive second wind a decade later. From Firth’s vantage point, the two-act structure of Barlow’s pop career gave the Take That star extra edge as a songwriter.

“He’s had a very unique life,” Firth observes. “If you have the fantastic career, then spend years writing for other people, you end up with the maturity to appreciate it all the second time around.”

By 2016, Firth took a punt and asked Barlow if he wanted to collaborate on Calendar Girls: The Musical.

“We just decided to work for a few years without a commission,” says Firth. “A musical is the stupidest risk you could take because you have so much work to do to find out of it’s working. We’d just been mates who’d been to each other’s houses to hang out, but the first time we sat down to try and write together, it was very freaky. The pop world is quite promiscuous and you write with a lot of people, where I write with only me.”

Barlow has had no problem turning his hand to any number of hits, but a musical was a still a distinct departure.

“Before we started, Tim was like, ‘I want you to do what you do, and I’ll make it into what it needs to be for the musical’,” Barlow explains. “I came to realise that when I make music, it’s all about the music, but in musicals, the story is the top of the pile.”

It’s strange to hear a man commonly regarded as one of pop’s biggest songsmiths refer to himself as a novice, but he’s adamant that the two are different entities: “There’s a whole history of people who were great songwriters, and not had musicals that were successes,” he says. “But it’s been brilliant, I’ve learned so much.”

Barlow’s involvement has arguably piqued public interest in the musical. On a cold January night, outside the Leeds Grand Theatre at a special preview screening, a cluster of thirty- and fortysomething women crowd around the stage door, brandishing sunflowers. What might appear initially to be the target audience for a musical about the WI turns out to be hardcore Take That fans.

“It’s very different this time round because they’re a bit older now,” Barlow observes, referring to Take That’s ever-faithful legion of female fans. “You don’t really get the people waiting outside the house and ringing your home number. It’s a but different now, and that’s good.”

Adds Firth: “When we did the first outing of [the musical], I thought there’s a chance that the audience would just come and scream ‘Gary! Gary!’ throughout the first act. They didn’t in the end – that was a joy in itself.”

At the end of the night however, Barlow and Firth do take to the stage for a brief bow, and there’s no denying the audience’s collective temperature scoots up a notch or 10. Still, even without the Barlow bonus, it’s clear there’s plenty of love in the room tonight for the tale that Yorkshire has already long held dear to its heart. And, for that matter, everyone else.