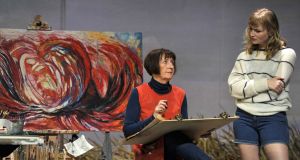 “I’ve nothing to hide,” Jane Brennan’s fascinatingly severe, mordantly irascible Beiv says of her decision to replace the external walls of the family holiday home, on an island off West Cork, with huge windowpanes. But, for a woman long rumoured to have murdered her ex-husband, who disappeared ten years earlier at sea, there is nothing innocent about the gesture.

“She’ll basically be living in a glass box?” guffaws her prickly, bitter son Colm (Marty Rea), who has long squirmed under her candidly feminist exhibitions. People in glass boxes shouldn’t throw stones, however, for Colm is no model of transparency himself. Home unannounced from San Francisco, and newly married to an ingratiating young art student, Bonnie (Rae Gray), this comes as some surprise to his mother and to Donal (Ian Lloyd Anderson), his childhood friend and former lover.

It says something about the suppleness in Harris’s storytelling that such details are dispensed with early and unfussily without dispelling the play’s more intriguing mysteries. Fascinated with ideas of art and ambiguity, psychology and performance, Harris actually does something similar to Beiv: laying things bare, be they a character’s conflicted sexuality or dark culpability, safe in the knowledge that human nature is the more compelling riddle.

The stage picture follows suit, where Francis O’Connor’s trompe l’oeil sea view seems to shift under the sunrise and sunset, just as Beiv’s brash abstract canvas, positioned brightly centre stage, seems to shift according to interpretation. “I see so much more,” says Gray’s sympathetically artless Bonnie, disappointed when its subject is confirmed.

As Colm, Rea’s performance is compelling for what he refuses to see, even when Anderson, playing affectingly against type, challenges his memories and makes his desires undeniable.

Under Garry Hynes’s limpid direction, the production moves with the stride of a psychological thriller but still finds the space to develop the rich compulsions and contradictions of character detail.

In one memorable scene, Beiv, neither terse nor tender, explains her work ethic to Bonnie, finally quietened, like a child, with a drawing exercise. In another, Colm, reeling from a new crisis, seeks reassurance from Donal in shy glances that his own submerged demons are not just waiting to surface.

In an intelligent and grimly funny play, one amusingly timely subplot involving a true-crime podcast stalking the family has it that “radio is actually a visual medium”. But the subtle details of the performance affirm the same for the stage.

Indeed, though the drama hinges on long hidden secrets finally dredged up, its deeper mystery is about ways of seeing and expressing; about what people conceal or reveal, to themselves and others. Like the “splodges” Colm reluctantly sees on his mother’s canvas, even the chilling truth when it emerges is subject to interpretation.

Runs at the Gate Theatre as part of the Dublin Theatre Festival from Thursday, October 3rd until Saturday, October 12th

‘There’s an Irish client none of us wants to handle ... from the North.’ Enter Gerry Adams
5

Hunger: The ugly truth about the world’s oldest problem
9