Dublin Fringe Festival: The delivery is flawless and the energy frenetic as we follow three women from childhood to adulthood 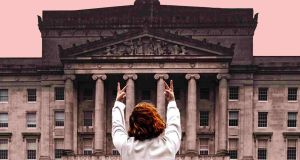 Two Fingers Up: The cast is strong and the writing is unrepentantly self-aware. Photograph: Laura Craig

The New Theatre
★★★★☆
Two Fingers Up explores the nuances of female sexuality and the effect of the Northern Irish school system on adolescent sexual exploration. The title should be taken as literally as you dare. Following the story of three women from childhood to adulthood, this production is, at times, painfully universal.

The production utilises a simple set as the backdrop for decades of experiences. The cast capably travel up through the years, representing many female rites of passage in the short 60 minute run. It is a strong cast and Seón Simpson and Gina Donnelly’s writing is unrepentantly self-aware. The prose is loaded with the recognisable confusion and the creeping shame of exploring your sexuality in a conservative culture. The delivery is flawless and the frenetic energy of the piece never wanes.

Its success is in its simplicity and in the tightness of the direction. This is a raucous and unapologetic celebration of female friendship and female sexuality. One to watch.

Runs as part of the Dublin Fringe Festival until Saturday, September 14th