Dublin Fringe Festival: A young woman pursues some sense of self in a troublingly unstable world. Can she hold it together? 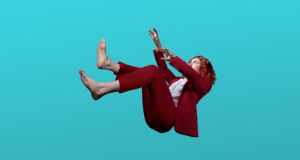 Peacock Stage, Abbey Theatre
★★★☆☆
You shouldn’t let other people define you – or so they say. But that becomes an open invitation for Essie, the precarious subject in Margaret Perry’s new play, letting internet quizzes determine which cute animal or roast meat dish she is (Lamb, in both cases), while soliciting friends and family for the words that best describe her: Clever. Self-starter. Feet on the ground.

One look at the compelling Breffni Holahan, perched above the stage on a high plinth in director Thomas Martin’s vertiginous production, lets you know the last description couldn’t be further from the truth or, indeed, the ground. Recently laid off and dumped by her girlfriend, Essie considers herself a folding chair, or “stones” ready to tumble, Holohan almost dematerialising under shifting light and shadows.

Perry’s play depicts an existence of similar instability: the casual corporations, pressure from peers and parents, or, more subversively, Essie’s gradually emerging self-delusions. But when the play’s form also becomes ruptured, a gesture of support feels like a pat resolution. Collapsible does manage to hold itself together, but it shudders.