A Very Old Man With Enormous Wings: Magic in the mundane 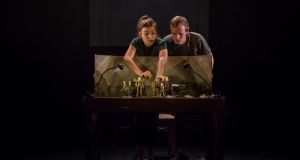 Based on a short story by Gabriel Garcia Marquez, A Very Old Man With Enormous Wings is not exactly a Christmas play. It is set in the exotic, balmy climes of South America, and there is not a seasonal blessing or a pine tree in sight. And yet the story’s spiritual undertones and its gentle exploration of the corrupting forces of capitalism feel very appropriate to this time of year. This finely-tuned production from the ever-inventive forces behind Collapsing Horse is an exercise in object-based storytelling.

It is amazing what you can do with a few desk lamps, a microphone and a handful of feathers. Director Dan Colley can find magic in the most mundane. With careful creative support from actors Genevieve Hulme-Beaman and Manus Halligan, set and prop designer Andrew Clancy, lighting designer Sarah Jane Sheils and composer and sound designer Alma Kelliher, we are transported beyond the realm of its kitchen presentation, and beyond the theatre itself.

The wonderfully weird (or weirdly wonderful) Hulme-Beaman takes on the role of Narrator, and she uses dramatic shifts in vocal register and elastic facial expressions to ensure even the youngest of audience members grasp key moments of goofiness and gravitas. She is aided on stage by the looming silent Halligan, who uses tiny puppets and live video projection to further animate the fable of an angel, who has fallen to earth and the town that has no idea what to do with him. Colley directs with an attention to detail and an emotional charge that will have an adult audience reaching for tissues, even if their young plus-ones remain unmoved.

Sadder still is the fact that the production’s closing next Saturday marks the end of Collapsing Horse, and Irish theatre will surely mourn the loss of their vision and inventiveness as much as audiences will. From their outrageously ambitious debut Monster/Clock in 2012 to the exquisite miniature world of Conor: At The End of the Universe, from their bold visual interpretation of Greek myth in The Aeneid to the bonkers sci-fi fantasy of Bears in Space, Collapsing Horse launched the careers of key actors, writers and producers in the independent theatre scene, while helping to radically change the culture of children’s theatre in Ireland. May 2020 brings Colley and his collaborators reappearance in a different form.