Abbey accused of reneging on promise of more Irish plays

Theatre professionals say Abbey had not delivered on committments, as writers express no confidence in board 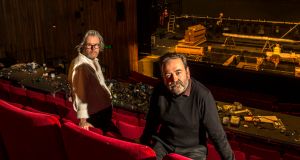 Irish theatre professionals and stage writers have accused the Abbey Theatre of reneging on commitments to produce more plays in-house and more new Irish drama, with writers adding that they no longer have confidence in the Abbey board.

Representatives of 427 actors, directors, designers, technicians and producers said in a letter to Minister for Culture Josepha Madigan on Monday that the Abbey has not lived up to commitments it made to produce nine in-house plays next year, following their criticism of its model almost a year ago.

The Writers Guild of Ireland, in a separate letter to the Abbey’s chairwoman, Dr Frances Ruane, accused the Abbey of acting in bad faith by failing to programme significant amounts of new Irish writing on its stages, contrary to its articles of association.

The letter from the theatre professionals says the Abbey’s 2020 programme neither addresses the concerns they first voiced in January nor lives up to commitments the national theatre made during follow-up discussions that its 2020 programme would be informed by the theatre sector’s requests and would include nine self-produced shows and two coproductions.

The unprecedented letter of January 7th this year, which was originally signed by 311 theatre professionals, protested about the effects of a large increase in coproductions and a reduction in self-produced plays at the national theatre under its directors, Neil Murray and Graham McLaren, leading to reduced job opportunities, reduced pay and knock-on effects across theatre.

The Abbey responded with commitments to produce more in-house shows and pay Abbey rates for workers on coproductions; it also reinstated a casting-director role. Both sides took part in facilitated discussions during the summer; after months of delay and disagreement the facilitator recently circulated notes from the meetings.

The Abbey confirmed receipt of the two letters and has passed them to the chair. It said the board next meets in January. It also outlined the many processes and actions it has taken following last January’s letter, and took specific issue with the minutes of the discussions.

“The Abbey Theatre reconvened as requested with a representative group of the signatories for a further two meetings, in June and July 2019. The theatre believes that these meetings – and the dialogue that took place in the first part of 2019 – enabled robust and productive exchanges. However, the Abbey Theatre does not believe that the ‘record’ of two meetings that took place over the summer is sufficiently accurate, or of an acceptable standard, to allow it to sign off on this ‘record’.”

Despite expectations for nine in-house shows, the theatre’s plan for the year ahead, which was unveiled on November 28th, has “three self-produced shows [and] three remounts” of existing shows (two of them touring), the signatories write. And “despite outlining five slots for new plays only one of these shows is new writing”.

The programme as outlined “currently offers 38 job opportunities for actors in 2020 directly employed by The Abbey Theatre”, the signatories write. “This is the lowest figure as yet offered by our National Theatre.” The programme “neither addresses, or understands any of our significant concerns with regard to the dearth of self-produced shows and the prolific increase in coproductions and the consequent impact of this programming model on our tiny eco system.”

The letter includes a 42-page document of minutes from two facilitated meetings between the Abbey and representatives of the signatories, who “respectfully request a response to our continuing concerns”. The letter is copied to the Minister, the Oireachtas Joint Committee on Culture, Heritage and the Gaeltacht, the Arts Council and the Abbey board.

It is signed by the panel of 16 industry professionals elected to represent the 427 signatories in discussions and negotiations: the actors Jane Brennan, Declan Conlon, Lorcan Cranitch, Margaret McAuliffe and Roseanna Purcell, the directors Eoghan Carrick and Annabelle Comyn, the actor-director Geraldine McAlinden, the producer Clíona Dukes, the designers Catherine Fay and Monica Frawley, the agents Maureen McGlynn and Jonathan Shankey, and the writers Jimmy Murphy and Joe O’Byrne.

The remainder of the programme features revivals or coproductions of works which other theatre companies have originated. This is a completely unacceptable output for our National Theatre

In the Writers Guild of Ireland letter, the organisation’s chairman, Thomas McLaughlin, said the substantive concerns of January’s letter have not been addressed by the Abbey’s artistic directors, who have “acted in bad faith by failing to programme significant amounts of new Irish writing on the Abbey stages”.

McLaughlin, representing the guild’s board, said the 2020 programme mentions only one new play (by Marina Carr) and the workshopping of nine plays. “The remainder of the programme features revivals or coproductions of works which other theatre companies have originated. This is a completely unacceptable output for our National Theatre from the point of view of playwrights.” It would expect the Abbey to produce at least 10 new plays a year in-house, each running for at least four weeks, he wrote.

The guild, representing writers in Ireland for stage and screen, maintained that the Abbey’s new-work department “is in fact a production management department” with a dramaturge attached. A dramaturge “in no way replaces the previously established Literary Manager role”.

The number of new plays by Irish playwrights on the Abbey stages has been reduced “to unprecedentedly low levels”, and the guild was “truly disappointed” by the failure to restore the role of literary manager in an autonomous department.

The letter was copied to Abbey board members, the Minister and the director and chairman of the Arts Council.

The Writers Guild of Ireland took part with the signatories in meetings and mediation with the Abbey, but McLaughlin wrote today that “rather than moving on and resolving the contentious issues”, the process has “ amplified the gulf between the Artistic Directors of the Abbey and the theatre community”.

He said that one of the Abbey Theatre’s main objectives, according to its articles of association, is “to continue the tradition of the Abbey Theatre as the National Theatre of Ireland for the purpose of acting and producing plays in Irish and/or English, written by Irish authors or on Irish subjects, and such dramatic works of international authors as would tend to educate and interest the Irish public in the higher aspects of dramatic art”.

The guild believes the board is derelict in its duty to produce new Irish writing in-house, he wrote, and is acting contrary to the articles of association by supporting the artistic policy of the current directors. “Consequently, the Writers’ Guild of Ireland no longer has confidence in the board of the Abbey Theatre.”