Theatre 2020: The best shows to catch in the coming year

Chekhov, McDonagh and O’Casey to be staged, along with newcomers to Irish scene 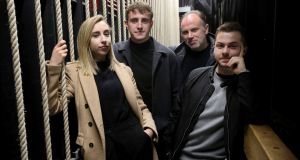 From right, Alex Murphy, Don Wycherley, Paul Mescal and Aisling Kearns from the cast of Martin McDonagh’s The Lieutenant of Inishmore, which will run at the Gaiety Theatre. Photograph: Mark Stedman

The coming year promises to be one of theatrical commemoration and celebration. Critical eyes will first be focused westward, on Galway 2020, which has launched several high-profile innovative theatrical productions, with community collaboration and engagement at their heart.

Branar’s Sruth na Teanga (March 2nd-29th) invites audiences aged eight and above to experience the evolution of the Irish language in an immersive promenade production that combines puppetry, music, video mapping and live performance. Druid Theatre, meanwhile, reach out to the rural margins with The Galway Tour (May-July), a festival of one-act drama rehearsed and performed in local towns across the county.

Elsewhere, The Gate Theatre marks the centenary of Ireland’s most turbulent political period with a new production of Seán O’Casey’s landmark play Shadow of a Gunman, which is set in 1920 during the War of Independence, under the penetrating gaze of director Louise Lowe (May 14th-July 11th).

Ireland’s greatest theatrical export, Riverdance, celebrates 25 years of domestic and international success with a stadium tour at the 3Arena in Dublin (February 6th-9th) and the SSE Belfast (February 19th-23rd), while the Abbey Theatre celebrate their most recent successes with a popular, tourist-friendly transfer for Roddy Doyle’s Two Pints (Olympia Theatre, August) and a national tour of Lisa Tierney-Keogh’s This Beautiful Village in June.

Co-productions with Corn Exchange, Blue Teapot, and One Two One Two, meanwhile, give a national platform to alternative perspectives including Irish-language speakers and artists and audiences with disabilities. Let 2020, then, be the year in which inclusion – across the regions, art forms and audiences – becomes more than just a buzzword.

WHAT TO BOOK NOW

The Lieutenant of Inishmore
Gaiety Theatre; January 27rd-March 3rd
When The Lieutenant of Inishmore premiered in Stratford-Upon-Avon in 2001, it was thought that Martin McDonagh’s play was too controversial to be produced in Ireland: its irreverent take on terrorism cut too close to the bone for a country still looking for stability after the Belfast Agreement. Almost 20 years later, the play’s politics are more palatable, but they are sadly still relevant in a local as well as global sense. Andrew Flynn offers a major new production of McDonagh’s dark comedy, featuring Paul Mescal in the starring role of Mad Padraic and Don Wycherley as his equally mad father Donny. gaeitytheatre.ie

Kiss Me Kate
Lyric Theatre, Belfast; February 1st-22nd
Building on the success of last year’s production of Stephen Sondheim’s Sweeney Todd, the Lyric Theatre Belfast collaborate with Northern Ireland Opera for a production of Cole Porter’s metatheatrical musical comedy Kiss Me Kate, starring Norman Boman, Jayne Wisener and Mel Stewart. Set both onstage and offstage, it follows a fiery couple feuding as they try to get a production of Shakespeare’s Taming Of The Shrew off the ground. The jazzy score – including Too Darn Hot – has entered the lexicon of popular music, so Walter Sutcliffe’s production will represent opera at its most accessible. lyrictheatre.co.uk

What I Don’t Know About Autism
On Tour: Abbey Theatre, February 1st-8th; Everyman Cork, February 11th-13th; Mermaid Arts Centre, Bray, February 15th
Actor and writer Jody O’Neill uses her own experiences as a starting point for this fascinating exploration of autism. Mixing narrative, song, dance and direct address, it explodes preconceptions about disability and reveals startling truths about prejudice and exploitation, while also offering stories filled with love. Performed by actors with and without autism, including O’Neill herself, all scheduled performances will be relaxed, to ensure a welcome for audiences of all needs. abbeytheatre.ie, everymancork.com, mermaidartscentre.ie

After its Dublin transfer, Druid embark upon The Galway Tour, which will see a company of 11 actors create, rehearse and perform some of the greatest Irish one-act plays in local communities across Co Galway during May and June, culminating in a month-long residency at The Mick Lally Theatre during the Galway Arts Festival. The one-act plays include The Rising of the Moon, The Gaol Gate, A Pound on Demand, Bedtime Story and The Briery Gap. druid.ie

Our New Girl
Gate Theatre; February 27th-March 4th
Following on from the success of Nancy Harris’s tense and thrilling drama The Beacon, The Gate Theatre give a platform to Harris’ new play. In Our New Girl, Harris charges another domestic drama with psychological tension, as a high-profile plastic surgeon (played by The Fall’s Aidan McArdle) abandons his family to take on a charitable case. When his wife looks to an Irish nanny for help with their troubled eight-year-old son, the family that seems to have it all starts to unravel. Harris’s work has shown an increase in confidence over the last several years, and this high-profile production shows that The Gate have confidence in her too. gatetheatre.ie

The Book of Names: Pumphouse
Dublin Port; June-September
ANU and Landmark launch an ambitious three-part nationwide co-production in 2020 with The Book of Names, which premieres in June. Director Louise Lowe will marshal regular collaborators, including designer Owen Boss and actor Thomas Reilly, to create a unique, site-specific historical ledger that will document the roles played by employees of Dublin Port in munitions smuggling during the War of Independence; the second and third parts are planned for 2021 and 2022.

Breakfast on Pluto
Galway International Arts Festival; July 19th-20th
Pat McCabe’s 1998 book, with its themes of emotional and physical transformation and its 1970s club setting, was surely always ripe for musical adaptation. However, Bob Kelly and Duke Special’s version seems particularly timely. The experiences of transgender teen Pussy, as she explores the boundaries of her sexuality, chimes with many contemporary debates about trans rights and social change. After a late-night work-in-progress club performance at last year’s Galway International Arts Festival, Breakfast on Pluto achieves a full production this year in a collaboration with Landmark Theatre that will surely have longer life. giaf.ie

Duck Duck Goose
On Tour; September-October
Fishamble Theatre: The New Play Company bring another new drama from their A Play for Ireland scheme to the stage, launching Catríona Daly’s Duck Duck Goose onto a national platform as part of the 2020 Dublin Theatre Festival. Set in the aftermath of a controversial rape allegation, Duck Duck Goose examines the conflict between loyalty, love and doubt when the rules of romance are being rewritten. What do you do when your best friend is accused of rape? Inspired by salient social issues that remain controversial, the Dublin premiere will be followed by a national tour that will open the conversation across the country.fishamble.com

The Boy
Abbey Theatre; September 17th-November 7th
Marina Carr continues to investigate Greek mythology in The Boy, a powerful new cycle of plays to be staged at the Abbey Theatre during the 2020 Dublin Theatre Festival. Directed by Catríona McLaughlin, The Boy opens up the political and ethical impetus of ancient drama to modern investigation. What does it mean to live in a world born out of violence? What responsibility must the individual bear? Forming a compelling narrative that speaks to the cyclical nature of human tragedy, The Boy has been created in two discrete parts, but will be best viewed as a durational event over a single day. abbeytheatre.ie