This week’s best theatre shows suitable for the whole family 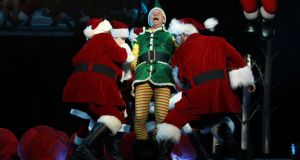 3Arena
Until December 29th
ticketmaster.ie
First there was the film (2003), in which Will Ferrell’s Buddy, a human raised as a Christmas elf, leaves Santa’s workshop for the streets of New York, where he hopes to meet his real father.

Then there was the musical (2010), in which Buddy’s adventures were scored by Matthew Sklar and Chad Beguelin, with pop-friendly numbers like No-one Cares About Santa, which failed to strip Christmas of its “sparklejollytwinklejingley” magic. Now, the musical has been transformed into a “spectacular” at the 3Arena, which plays across three stages and giant TV screens to ensure 360-degree immersion in the story.

If the digital surround sets don’t make you feel a part of the show, the choreographed moments of audience interaction will. Spectators are invited to help decorate a 30-foot Christmas tree, to take part in an epic snowball fight, and to help facilitate Buddy’s happy ending, as professional stunt Santas take sleigh rides above you.

Kym Marsh and Shaun Williamson headline the Christmas confection alongside Tam Ryan as Buddy The Elf. You can join 4,999 other audience members at 3Arena stage for its final shows today and tomorrow.

Room on the Broom

Pavilion Theatre, Dun Laoghaire
Until January 5th
paviliontheatre.ie
If you cannot bear to hear another Christmas carol sung, Tall Stories’ Room on the Broom offers seasonal relief with its adaptation of Julia Donaldson’s picturebook about a witch, her capacious heart and her not-so capacious broomstick.

If the magical protagonist harks back to Halloween, the message still chimes with timely goodwill: goodness reaps its own rewards.

Olivia Jacob’s production eschews the predictable rhythms of Donaldson’s text, using songs from Jon Fiber, Andy Shaw and Robin Pric to enrich the story of the witch, whose kindness to (animal) strangers is repaid in abundance by her new friends.

Morgan Large’s design and Yvonne Stone’s puppets give a deceptively rough-and-ready feel to the well-polished show, which, at 60 minutes long, creates a rich theatrical adventure from a short, infectiously memorable text.

Jake Waring’s comical, smart-talking Southern-beau Frog is a highlight among a warm ensemble, headed by Rosamund Hine as the Witch.

It is an inspirational lesson in the transformational power of theatre and the imagination: Iggity-Ziggity-Zaggity-Zoom . . . What adventures you can have with a simple broom.