The best theatre shows to see this week 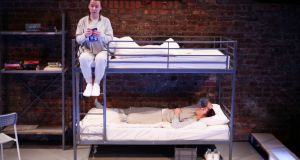 Nothing But a Toerag

Revived for a national tour following its debut at the 2017 Dublin Theatre Festival and subsequent international success, Iseult Golden and David Horan’s play Class, which they also direct, makes for an entertaining and challenging lesson. When a young boy has been acting up in school, his separated parents, Donna and Brian, are called into a meeting with his teacher. However well-intended, and couched in the caring terms of modern education, the power dynamics of the classroom see them reverting to the nervousness of childhood.

That is also the fillip of the performance, in which the marvellous Sarah Morris and Stephen Jones also play two children under Will O’Connell’s supervision. In energetic, intercutting scenes Golden and Horan tease out the influence and obstacles of class structure in every meaning of the term. Like Morris’s performance, perfectly alive to the difference between childlike and childish, comedy here comes without making anyone cartoonish. Wary of being supercilious, O’Connell’s teacher is trying to help, and, alternately enthusiastic and guarded, Donna and Brian both want what’s best. But, like learning impediments, some barriers need to be acknowledged if they are ever to be dismantled.

Nothing But a Toerag

Last month, when an older British woman was asked her opinion on the current prime minister, her terms of disparagement immediately went viral. “Don’t ever mention that name in front of me,” she told Sky News, “that filthy piece of toerag.” Quaint enough to avoid bleeping, but so vividly disdainful to launch a hashtag, the word seems a durable brickbat. What does it say, then, if someone turns that word on herself?

Aisling O’Mara’s two-hander, which debuted last January at the First Fortnight festival, finds a new prisoner Bianca O’Mara confined to a cell, for an unspecified crime, with a self-diagnosed bipolar cell mate played by Clare Monnelly. Together, they represent certain extremes: where a taciturn, prickly Bianca is needled for information by a more voluble interlocutor. Directed by Amelia Stewart, that makes for a fractious dark comedy, where the women struggle for dominance through wit, intimidation and even dance moves. But the intention is to unearth something hidden deeper, in the demons of suppressed trauma, which are better accessed through the intimacy and rapport of dialogue. A toerag, in a pinch, can still serve a benefit. There are plenty of ways to come clean.