The Fever review: An experiment in empathy and the nature of community 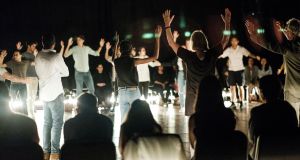 The Fever: an antidote to the era of the individual. Photograph: Waleed Shah

Samuel Beckett Theatre, Trinity College Dublin
★ ★ ★ ★
One of the roles of drama is to make the audience feel differently, and this unusual and thoughtful production does that in spades. An intense and intimate experience, The Fever plays with the way we interact with strangers, our interdependence, and the nature of common humanity. It’s not so much a theatre production as an experiment in empathy, an exploration of the nature of community and of aloneness.

The audience’s authenticity and openness are essential to this “carefully orchestrated convergence”. But don’t cringe: it avoids embarrassment or anything happy-clappy. We sit around a central space in a single line, and... something simple happens. Which leads to something else, very naturally and unselfconsciously. Sometimes people are asked; sometimes they just do.

There’s the slightest seed; there is a cast; and, although it sounds woolly, there is control, and this is more careful and pointed than it first appears.

This show, by the US company 600 Highwaymen, is described as a response to the United States’ polarised social and political climate. It’s also an antidote to the era of the individual, and a refocus on the dynamic of the group, forcing reflection on our empathy and how we behave.

In Ireland, interaction with strangers is normal and trust less strained, but there is also a reluctance to “interfere”, and it’s fascinating to see how we react when the limits of responsibility for others are pushed.

The Music Quiz: Which was the first Irish act nominated for the Mercury Prize?
8

Has Britney Spears really been judged incompetent to vote?
10