Crime and punishment and gorilla suits: this week’s theatre highlight

Brokentalkers’ sharp and stealthy new production asks us to examine our prejudices about the roots of crime, and the inhumanities of the prison system, offering no easy escapes 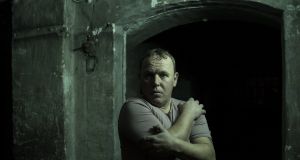 The Examination: at the Project Arts Centre in Dublin as part of the Dublin Fringe Festival

The latest work from Brokentalkers begins with a smack of betrayal. In a recorded interview for the company’s probing take on healthcare in the Irish Prison Service, debuted last March and back for the Dublin Fringe Festival fresh from a run in Edinburgh, one prisoner asks to be seen “not as animals in a cage but as human beings”. What would he think now to see the lights come up on a figure trapped behind a desk, in a full gorilla costume?

So begins a more politically sly and artfully provocative piece than you might expect for a show developed as part of an academic research project. Its uncanny balance is embodied best by the man within that suit, Willie White, a stand-up comedian gone straight who recounts his personal experience of incarceration.

White is joined on stage by Gary Keegan, co-director of the show (with Feidlim Cannon), who appears in a handsome suit to share uglier ideas. These belong to the 19th-century quack Cesare Lombroso, whose notes on “the born criminal” are so patently ludicrous that our own prejudices lay unchecked, confronted by vivid, unexpected evocations of slopping and the myriad ways devised to make prisoners suffer.

Artfully enlivened by supple animations, it also makes for a disarming and involving experience of confinement in a show that wisely offers no easy escapes.