A Very Old Man with Enormous Wings review: A children’s story for a sceptical age 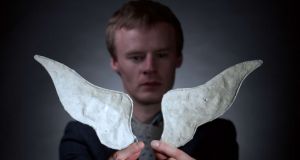 Project Arts Centre
★★★★☆
There’s no lesson in this charmingly offbeat adaptation of Gabriel García Márquez’s children’s story, its teller warns us: “So don’t go looking for one.” Nonetheless, there is something instructive about adapting magic realism for a sceptical age and an audience of all ages.

Told by Genevieve Hulme Beaman, whose gauche narrator smiles as though new to the concept, and silent partner Manus Halligan, who shyly manipulates Andrew Clancy’s handsomely nostalgic table-top set, it is a model of ingenuity through humble means. Two wary matchstick parents discover a feeble angel (a crouching figurine, trailed with feathers) and lock him in their chicken coop. When the town come to gawp and taunt, our heroes do the decent thing – and sell merchandise. Director Dan Colley is similarly unsentimental, exposing the apparatus of DIY technology, where songs loop and cameras swoop. Whether we can trust the angel, or the people, the simple act of creation is something to believe in.