This Beautiful Village: One-note characters addressing a symphony of concerns 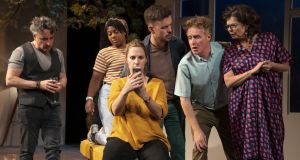 Abbey Theatre, Dublin
★★★☆☆
“We’re not going to bring down the patriarchy tonight,” one member of a south Co Dublin residents’ association ventures during a fractious emergency meeting. “Not with that attitude,” her host, Liz (Ruth Bradley), whose own agenda is nothing if not ambitious, counters.

Whatever powers are invested in this council – a group of six neighbours, who themselves resemble a survey of different attitudes – they already appear overextended by a more immediate task. How should they respond to a hurtful piece of graffiti on the street, apparently directed at a woman named Jessica, loaded with the watchwords of a malignant culture?

The men in the group – the squeamish dope Philip (Damian Kearney), the insincerely woke Dara (Michael Ford-FitzGerald) and the crude “craft-beer prick” Paul (Aidan McArdle) – instinctively downplay the misogyny of the graffiti, merely proposing to paint over it.

Liz would go deeper (although how is not quite clear) to reason with the vandal, finding support in Grace (Bethan Mary-James), a black public-health doctor, herself contending with daily abuse, if less in Maggie (Pom Boyd), the neighbourhood’s casually disparaging doyenne. “If you remove it and don’t examine why it’s there,” Liz argues, “it will happen again.”

In David Horan’s brisk production, characters are worn lightly, more in the service of gender comedy than the expectation that somebody might identify with them

If Lisa Tierney-Keogh’s comedy itself feels like history repeating, it is because it recapitulates the salient political talking points of our time – of gender bias, unchecked privilege, a repressive culture that makes women feel “less than” – within a nostalgic form: a middle-class satire somewhere between Yasmina Reza and Bernard Farrell. It’s a light vehicle for weightier considerations, a gathering of one-note characters addressing a symphony of concerns.

In a good play, they say, everyone is right. In this one there is little ambiguity about who is wrong, circuitous arguments and blurted confessions exposing toxic male frustration, unapologetic fraud, conservative fears and irredeemable racism.

In David Horan’s brisk production, where Ciaran Bagnall’s modest set evokes the outline of contemporary suburbia, characters are worn similarly lightly, more in the service of gender comedy than the expectation that somebody might identify with them.

Yet the more sympathetic characters, like Bradley’s Liz (whose marriage to a woman named Jessica we later learn is under strain) tend to speak in manifestos, while Mary-James’ Grace, the most roundly sinned against, is drawn as stoic and saintly to the point of patronisation.

That the play gives her the last word, an empowered call for progressive reckoning, might be gratifying to see. But like the echo chamber one character decries, and the easily exposed straw men, it comes with the sense that liberal politics are here being pandered to rather than challenged. The unexamined ills of culture may indeed be corrected. But not with that attitude.

Runs at the Abbey until Saturday, September 14th