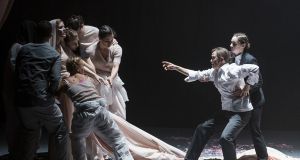 Only a really curmudgeonly purist would allow objections to the prominence of dance spoil their enjoyment. Photograph: Irish National Opera

What do you risk by asking a choreographer to direct an opera?

If the choreographer imports rather than suppresses their original calling, yielding opera with an unconventionally prominent role for dance and movement, then perhaps the main thing you risk is alienating purists.

But every director risks that.

Irish National Opera must have liked this risk assessment. Less than a year old, it was a bold move – considering how much their fledgling profile depends on each one of their initial productions – for INO to invite choreographer-director Emma Martin to make her operatic debut with Gluck’s 18th-century re-telling of the ancient Greek Orfeo myth.

With Martin, dance shares centre-stage with singing. This is even evident numerically, with chorus and dance troupe the same in size, four members each. The result is an unusually active stage, without ever becoming a three-ring circus, but nearly always with something lively to respond to visually as well as musically. If it’s true that the internet is degrading our attention span, while also inflating our threshold for gratification, then maybe Martin’s departure is profitably in keeping with the spirit of the age. By accommodating our diminishing faculties she might also be channelling Gluck himself, a by-product of whose attempts at operatic reform was shorter operas. Orfeo ed Euridice clocks in at around 90 minutes.

There was movement I didn’t understand because I don’t know much about contemporary dance. But there was plenty that made immediate sense. Discreet yet grotesque tics and spasms appeared as the raging hostility of the ‘furies’ guarding the gates of Hell was gradually broken down by the beautiful music of Orfeo trying to get in to rescue his wife. Soon after, as Orfeo makes his way through the idyllic Elysian Fields, the dancers somehow wreathe around and encompass him in fluid slow-motion, occasionally freezing briefly in the form of a living tableau before dissolving and starting again.

Only occasionally did it feel as though dance upstaged voice. The rest of the time the blend was judicious and created value. This blend extended to the involvement of the chorus whom Martin seamlessly incorporates within the movement, the fact that they are not professional dancers – and that the dancers don’t sing – readily forgotten.

Only a really curmudgeonly purist would allow objections to the prominence of dance spoil their enjoyment of the production’s many other qualities. Mezzo-soprano Sharon Carty takes full yet gentle possession of Orfeo’s wide range of emotions – grieving, raging, pleading, surrendering, celebrating – displaying clean vocal ease and expression in Gluck’s sweet lyrical lines. In Act III she is uncannily matched in sound for her long-awaited exchanges with the rescued Euridice, soprano Sarah Power, wrapped and facially veiled in ghostly, bridal white with a massive train. This was the most striking and dynamic of designer Catherine Fay’s modern-day costumes which ideally complement Sabine Dargent’s minimalist sets and Stephen Dodd’s naturally dramatic lighting. Soprano Emma Nash ably rounded off the small cast’s trio of singers in the important role of Amore.

Conductor Peter Whelan, consistently attentive to the balance of voices and instruments, brought an intense, crisp energy to the stylish playing of the Irish Baroque Orchestra. Soloist Miriam Kaczor, playing baroque flute, provided a highlight in the pastoral Dance of the Blessed Spirits.