Dublin Theatre Festival: Unquestionably a celebration of the protest but with layers of nuance 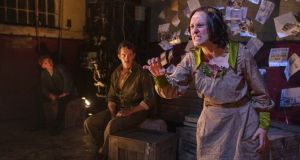 Deirdre Kinahan’s unashamedly humanistic new play deals with the embargo placed on the transport of British weapons and arms by Irish workers during the War of Independence. The temptation to get foursquare behind the army of the coming Republic must have been tempting, but, though the play is unquestionably a celebration of the protest, Kinahan and her team inveigle impressive layers of nuance into their conversation.

Presented to remote punters in soberly vision-mixed stream, the performance from the Pumphouse in Dublin Port sets up a useful moral dilemma for its three characters. Jane (Mary Murray, heroically unrestrained) flees to Amiens Street Station after becoming involved in a violent affray and expects Gracie (the versatile Matthew Malone), a transport worker and former British soldier, to drive her to safety in Belfast. Alas, soldiers are moving towards the train and Gracie, a supporter of the embargo, finds himself torn between the greater political good and the immediate needs of a comrade. Jack (neat, focussed Callan Cummins), a committed IRA man, has no such conflicted feelings.

Zia Bergin-Holly’s clever set – cascades of political posters and fliers forming a quasi-arboreal centrepiece – provides the actors with space for performances that move seamlessly from monologue to duologue to whatever the three-person equivalent is called. Taut and dictatorial, Cummins, as Jack, gives us a young man fuelled by uncomplicated historical outrage. Gracie and Jane are, in their different ways, more equivocal about the ongoing conflict. As a gay man and a veteran of the first World War, he is aware of being too-often expelled from the conversation. A proud trade unionist with a satirical suspicion of middle-class Republican leaders who performatively pull on Gaelic garb, Jane wonders if the new bosses will turn out to be the old bosses in unconvincing disguise (as if!).

It is Mary’s argument that hits home the hardest. She argues for a socialist future but she also makes the case for human tolerance – her own desperate plight providing the dilemma – over bald ideology. We shan’t say where that argument leads, but we can point out that the story begins, not with a British atrocity, but a moment of undeserved brutality from the Republican side.

A brave, strongly acted production from the ever-reliable Fishamble Company.

Live performance concluded. Recorded version available to view until October 25th at fishamble.com/embargo and on YouTube.