Dublin Fringe Festival: The capital is underwater in this enlightening and confronting look at climate change 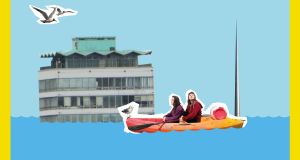 Afloat: the play forces the audience to confront their own role in climate change. Photograph: Manny Singh

1662, Smock Alley Theatre
★★★★☆
The climate crisis that you have been warned about has already happened in Afloat, an entertaining and enlightening new play from Eva O’Connor and Hildegard Ryan. Dublin is underwater and, trapped on the top floor of Liberty Hall, best friends Blaithin (O’Connor) and Deborah (Annette O'Shea) might be the only people left alive. What will they do with their final moment? Bicker and eat biscuits, apparently, although they do have some regrets about failing to act upon the apocalypse when they had the chance. The spark between the mismatched pair (one a cynical catastrophist, the other an armchair activist) lends itself to some very funny writing, but, as the bitching gets personal, the writing quickly becomes tiresome.

Just when you have had enough, however, the play spins entirely on its head, and the dramatic denouement plays a clever trick that throws the plot upside down, and forces the audience to consider, in very concrete terms, their own role and responsibility in the future of the planet. Is our most powerful resource really denial, as Afloat’s “experts” suggest? Surely, O’Connor and Ryan counter, it must be action.