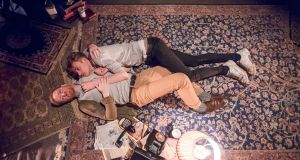 Vespertilio: an endangered bat is at the centre of this engaging two-hander. Photograph: Liz Isles

Boys’ School, Smock Alley Theatre
★★★☆☆
An endangered bat provides the unlikely narrative fulcrum in Barry McStay’s effortlessly engaging two-hander. When socially awkward Alan (Benedict Salter), self-appointed protector of the last greater mouse-eared bat in Britain, encounters confident, streetwise vagrant Josh (Joshua Oakes-Walters) in the mammal’s cavernous habitat, they strike up a mismatched romance, their differences in age and temperament fuelling their attraction. The parallels between Alan’s solitary life and that of his rare flying charge are hard to miss, but McStay’s drama wisely doesn’t lay this theme on too thick. Instead, it focuses on the burgeoning relationship between the two men, who enlighten each other about their respective worlds – cue jokes about Batman and Robin – while hiding secrets of their own. There’s nothing wildly original in all this, but under Lucy Jane Atkinson’s direction, there’s a wistful charm that pulls the audience in, while both actors turn in winning performances as the incongruous couple.