Cuckoo review: Lifting the lid on the pressure cooker of South Korea 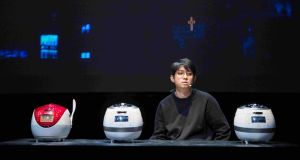 Space Upstairs, Project Arts Centre
★★★★☆
Pressure building in a rice cooker becomes a metaphor for the economic duress endured by South Koreans in this delicately crafted performance-lecture. It’s not quite a solo show, since its presenter, Jaha Koo, is joined on stage by three robotically enhanced rice cookers. That’s right. Two of them argue with each other, while the third gets on with, well, the business of cooking rice.

It’s a humorous introduction to a sombre view of a society under enormous strain, following the $55 billion bailout of South Korea by the IMF in 1997. Statistics for the acutely high suicide rate are personalised in the calm narration of Koo, a composer and video artist based in the Netherlands. Anger is reserved for the former United States treasury secretary, Robert Rubin; otherwise Koo’s tone is melancholy, describing a state of mind that translates as “helpless isolation”. Tears in his eyes confirm this as a work of personal testimony, quietly powerful.