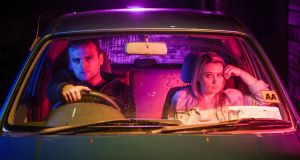 Black Box, Smock Alley Theatre
★★★★☆
Alison Spittle’s debut theatre production packs a serious nostalgic punch. Depicting a painfully accurate account of the Irish mating ritual (encompassing a trip to the cinema, a pint and a shift), this production is a delightful blend of comic relief and relatable cultural references.

Starlet represents a multitude of familiar stereotypes but Spittle’s fresh writing ensures that these are not tired tropes getting another new airing, but are instead relatable, recognisable and ultimately loveable. The couple at the heart of this production are played by Peter McGann and Roxanna Nic Liam. Both performers are well cast in their roles and use nuanced gesture to depict the sheer awkwardness of Irish dating life. Their performances could easily veer into exaggerated slapstick but never do and the costume design accentuates the personalities on show.

This is a tightly directed and well written piece of theatre. Prepare for belly laughs.