Patrick Freyne: Homeland is a tool for teaching Americans geography

Claire Danes in Homeland is basically Dora the Geopolitical Agitator 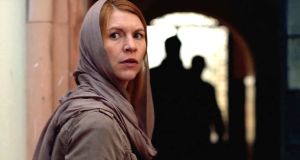 Homeland (Thursday, RTÉ2) is one of those programmes that has been on the television for ever, like Heartbeat or ER or Last of the Summer Wine or the 2020 Irish election. It probably pre-existed television. I can imagine a music hall version, in which a weeping blond American agent foils the malevolent tsar of Russia or foments rebellion among the feckless Irish.

The show actually began with a pretty neat premise: a returning US prisoner of war (Damian Lewis) may or may not have been radicalised by his Afghani captors, and a mentally ill CIA agent (Claire Danes) must investigate him the only way she knows how, by falling in love with him (this is also, for the record, how The Irish Times undertakes its journalistic investigations).

Like America’s real foreign policy adventures, Homeland has suffered from mission creep since then and now many, many Damian Lewis-less series later, it’s about super spy Carrie Matheson (Danes) travelling the world teaching cable-news-addled Americans lessons about geography. It’s basically Dora the Geopolitical Agitator. The lessons in each series are largely pretty similar and can be summed up thusly: “Here’s a rich and interesting culture that hates us and with whom we are nonetheless meddling.”

In the early days Homeland shone in comparison with the US’s other major espionage drama, 24. Each season of 24 would begin with curmudgeonly public servant Jack Bauer (Victor Meldrew) trying to have a quiet life in the burbs before being beset on all sides by his two enemies: terrorists and steps. “Not terrorists and steps!” he would cry. “I hate terrorists and steps!” And then he would breathily run up loads of steps while brutally torturing terrorists for reasons and America.

Homeland was and is more nuanced than 24 but then so is John Craven’s Newsround, WWE wrestling and the inscrutable Irish electorate (apparently)

He had but 24 hours to achieve his foreign policy aims and these hours and minutes ticked down in the corner of the screen, which meant that in the moment, when the elderly Bauer wasn’t shouting angrily into a phone at a service provider or throwing a pen-pushing bureaucrat off a roof, we, the viewers, were tapping our watches and saying: “Those terrorists aren’t going to torture themselves, Jack, get a move on.” And Jack would say things like: “I’m an American not an American’t” before stabbing a foreign-accented free thinker in the eye. Yeah, he was a maverick who didn’t play by the rules (specifically, the Geneva Conventions).

Anyway, 24 became the template for actual American foreign policy, so by the time Homeland came around, the American people were tired of war and ready for something a little more nuanced. Homeland was and is more nuanced than 24 but then so is John Craven’s Newsround, WWE wrestling and the inscrutable Irish electorate (apparently). Here on Homeland, now in its eighth season, Carrie is recuperating from being imprisoned and tortured by the Russians in the previous season. She’s traumatised, she’s had a psychotic episode and her last polygraph test suggested she lied about not giving sensitive information to the Russians. Pretty standard for the US nowadays, says you.

Her handler Saul instantly ships her back into action in Afghanistan. This reminds me of those episodes of The A-Team where Hannibal would break Murdock from the psychiatric hospital rather than letting him get the treatment he clearly needed (I know that’s not the point of the original A-Team but in my more sensitive remake I’ll be focusing a lot on this). Saul is trying to manage talks between the puppet kleptocratic Afghan government and the Taliban before the Americans abandon the region for ever, while a squad of soldiers is sent to accompany an NSA tech guy to repair some spying technology in Taliban territory. He needs Carrie because, well, she’s the main character.

Outside the work of David Simon, everyone is always real good at their job on American television

Carrie instantly eludes her handlers to cosplay as a local on a motorbike and visits a former source. She is the most conspicuous undercover operative imaginable what with the big weepy American head on her, but she eventually finds the man’s home and discovers her former source is very former. He has been murdered by the Taliban for working with the CIA.

Carrie is sent into a spiral of self-doubt because she can’t remember if, when off her medication in Russian custody, she gave up the names of CIA operatives. Nice twist. I mean who among us can truly remember if we worked with the Russians? Anyway, if this is the theme of the final series it’s a nice, neat echo of the first. And Danes, to be fair, is a great actor (she is, I suggest, a Great Danes) and Carrie is a great character.

She’s emotionally complex and damaged and, like Jack Bauer, she’s a public servant who does not play by the rules. Americans really like to see this quality in a person – doctors, quantity surveyors, dentists, child minders, bin men, brain surgeons, referees, driving instructors – if they play by the rules, they are simply un-American. This is why their infrastructure has gone to s**t and yet, far from depicting this decay, American workplace dramas usually operate against a backdrop of supreme technological competency. Outside the work of David Simon, everyone is always real good at their job on American television. It’s late capitalistic competency porn. And who could object to being surveilled by a surveillance state as slick and all-knowing as the one in Homeland? This is, of course, what the CIA want you to think.

Over on Channel 4’s Hunted (Thursday), 10 volunteer fugitives are trying to evade a team of “hunters” who access CCTV cameras and hack phones and control helicopters. It does feel a little like the state is softening citizens up for post-Brexit reality. The hunters are led by Ben Owen, a jargon-spewing middle manager (the future dystopia will be banal) who also happens to be “a former sniper and intelligence officer”. In the first episode Ben’s intelligence skills are on display, so if his sniping abilities are not showcased later in the series, this is some serious misdirection. It will be a bold move for network television but one I’ve been predicting since I first saw The Running Man.

And so it is that 10 members of the public are let loose from a lorry in the middle of Bristol without phones or money. Two young women respond to this by running around in frantic circles. A large gym owner can’t stop himself from giving a cameo to his own gym despite the probability that the hunters will be waiting for him there. Two self-confessed mummy’s boys huddle together for warmth as the cold night draws in. The camera doesn’t return to them in this episode. I assume they’re dead. The most effective fugitive is 78-year-old former military man Mervyn Little, who suavely tips his Panama hat to a CCTV camera and manages to lose himself in a small English town that is, to the hunters’ annoyance, filled with elderly gentlemen in Panama hats. If Mervyn isn’t garrotting his pursuers Jack Bauer-style by the end of the series I will be deeply disappointed.