The conversation turns ugly the moment the post-election Liveline opens 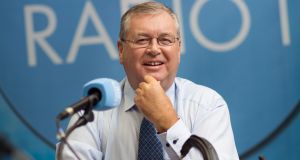 Joe Duffy: like any good referee in a sparring match, he knows his audience likes nothing better than a good scrap

It’s Monday, election day plus two, and already on air discussions about coalition permutations are turning ugly. A Sinn Féin voter deems a partnership with Fianna Fáil as “very iffy”, rejecting outright any pairing with Fine Gael. This isn’t a problem for the Fine Gael supporter, who claims Sinn Féin has “blood on its hands”. Just half an hour into the conversation, the parties are hurling abuse at each other. Even by its own shouty standards, the first post-election edition of Liveline (RTÉ Radio 1, weekdays) is a bad-tempered affair.

Anyone hoping that the end of the election campaign means no more on-air political arguments has reckoned without Joe Duffy’s phone-in show.

The people may have spoken, but they haven’t talked to Joe yet.

And after an election in which the tectonic plates of Irish politics lurched dramatically, there’s plenty to talk about. From the moment the lines are open, the calls pile in and the callers pile into each other.

And so it continues, with the same hypnotic cruelty of a cat toying with a wounded mouse

On one level, the show provides a snapshot of why the country voted the way it did. Callers tell how they voted for Sinn Féin out of disillusionment with the political establishment: former Fianna Fáil voter Paul sums up the mood when he says he’s “fed up with the top two parties”. But what transforms the episode from rather obvious overview to cacophonous classic is the intervention of Fine Gael supporter Marian, whose well-spoken accent belies the ferocity of her partisanship.

While Marian’s factual arguments in favour of her “hero” Taoiseach Leo Varadkar are standard economic ones, it’s her formidable debating arsenal that really sets the show alight. She imperiously orders other callers to let her speak while dismissing them in patronisingly polite terms: “My dear, do you think houses are going to be shooting up like mushrooms?”

Marian also harks back to Sinn Féin’s past association with republican violence, from her “blood on their hands” remark to asking: “What did Sinn Féin ever do, except rob a few banks?”

This last line is too much even for Duffy, who chastises her in that anguished tone he reserves for callers who he knows are delivering radio gold. Marian occasionally apologises for “going too far”, but when another listener, Nicola, accuses Fine Gael of having blood on its own hands for its stewardship of the health system, Marian resumes her genteel Rottweiler approach, to the point that a plea goes up: “Joe, can you get her to calm down?”

Duffy half-heartedly breaks up the clinch: like any good referee in a sparring match, he also knows that his audience likes nothing better than a good scrap. Even so, one hopes that when actual coalition negotiations begin, it’s a more civilised affair than Duffy’s debate.

Throughout all this, Duffy plays up his show’s role as an election bellwether. He reveals the results from a pre-election audience survey conducted at an outside broadcast some weeks previously, informing listeners that he’s opening the envelope with a theatrical flourish that would be excessive at the Academy Awards ceremony.

He launches impromptu telephone polls on potential coalition combinations, while ostentatiously announcing that the voting can’t be manipulated by repeat calls, presumably to deter Vladimir Putin from interfering. As an afterthought, he adds that this poll is just an “indication”. Among the entertaining arguments and colourful opinions, it’s a reminder that Liveline may give voice to people, but it’s not the voice of the people.

When it comes to the actual election, it’s Duffy’s station colleagues who deliver the real goods. For once, Ryan Tubridy isn’t indulging in the usual RTÉ logrolling when he praises the network’s news and current affairs department for its election coverage as he opens his RTÉ Radio 1 show on Tuesday morning.

Over Sunday and Monday, Radio 1 presenters such as Sean O’Rourke, Áine Lawlor and Rachael English handle the cascade of outside reports, political interviews, expert analysis and ever-changing data with aplomb, commanding their brief while sounding both authoritative yet relaxed.

Their performances are all the more impressive given they are clearly reeling from the death of their friend and colleague Keelin Shanley on Saturday. (See Radio Moment of the Week below.) It’s public service broadcasting at its finest.

When it comes to post-election mopping up operations, however, Mary Wilson stands out on Drivetime (RTÉ Radio 1, weekdays). Wilson has always been a presenter conspicuously lacking in plámás; after she fails to sweet-talk political rivals into a potential partnership on Monday’s show, fellow presenter Philip Boucher-Hayes deems her “a great broadcaster, but a terrible matchmaker”. But when it comes to coolly putting political figures through the wringer, she is almost without match.

On Wednesday, following the announcement that Brendan Howlin is to stand down as leader of the Labour Party, Wilson talks to the Wexford TD. Any notion that the host will bid Howlin a fond farewell is quickly dispelled, as she focuses on Labour’s disappointing electoral performance.

Howlin tries to frame this in cyclical terms, saying that while Sinn Féin’s tide came in during this election, it will go out again. But Wilson is having none of it. “The tide went out for you in 2016 and it stayed out,” she says, “in fact it receded some more.” To the charge that Labour has little in the way of new blood, Howlin responds that the party has three new TDs, only for Wilson to point out that two of these deputies have actually been re-elected.

And so it continues, with the same hypnotic cruelty of a cat toying with a wounded mouse. In the end, Howlin pushes back more forcefully: saying that he feels “liberated” now he’s quitting the leadership and he upbraids his host for constantly concentrating on Labour’s past failures. It’s a painfully amusing ding-dong, if not especially revelatory. But after an election which shook up the status quo, putting the squeeze on politicians is probably a winning strategy

The moment news of Keelin Shanley’s death is announced on Saturday Sport (RTÉ Radio 1), the sense of shock is palpable. Presenter Des Cahill just about keeps his composure as he talks of his admiration and friendship for Keelin’s work on TV and radio, covering news, current affairs and more. His stunned grief is understandable. Even as RTÉ mourns Gay Byrne, Marian Finucane and Larry Gogan, Keelin’s egregiously premature death has robbed Irish broadcasting of one of its brightest stars, who despite her many achievements had so much more to give. Anyone who heard her various tenures on Morning Ireland and the Today programme will know that she was a natural on radio, unerringly finding the right tone while easily wearing a deep knowledge. Anyone who was lucky enough to know her, as this writer was, will also miss her friendship, intelligence and sense of humour, while sympathising with her family at their loss. As a saddened Sean O’Rourke said on Sunday, “She was as sharp as she was sweet.”