Patrick Freyne: We have an endless taste for shows about stressed people doing up houses 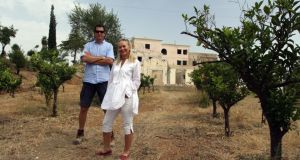 Dr Eva Orsmond is the anti-Dermot Bannon while her husband Wyatt is a no-nonsense engineer in cargo shorts.

If Room to Improve has taught us anything, it’s that the Irish have an endless taste for programmes about stressed people doing up their houses. Architect’s blueprints are like sugar to us. Budget overruns are our cocaine.

Concerns over subsidence are what we have in lieu of healthy parental attachment. We find house makeovers relatable in a way that we don’t find, for example, a properly functioning healthcare system, teetotalism or the front bench of Fine Gael relatable.

She’s a star of RTÉ’s bodily reconstruction wheeze Operation Transformation, where she is obsessed not with bricks and mortar but with fallible flesh which she prods and judges.

She is very much the anti-Dermot Bannon. She’s trying to stop people adding extensions to themselves. (“My body is a temple,” I say to my wife, when I’m filling my head full of cake. “And I am building an extension”).

What Orsmond, as a Finn, doesn’t understand – and you probably don’t understand either as an Irish Times-reading hipster – is that the plain people of Ireland are obliged to eat gluttonously due to the trauma of the Famine, just as we have to watch Room to Improve because of the Land League.

Consequently, Orsmond has not entered our national subconscious like Dermot Bannon has, a man whose face we now shape into mash potato sculptures every Sunday night, Close Encounters of the Third Kind-style (that may just be me).

She also misses out on the populist vote with her choice of property, not a suburban gaff with notions, but a huge if derelict Portuguese hotel.

Such crazed opulence might have been relatable back in the days of the Celtic Tiger, when our neighbours were constantly saying things like, “I just got a 100 per cent mortgage on all of Co Leitrim” and “I’m burning all my dirty fivers on Friday, call around,” but since then we’ve been doing our best not to lose the run of ourselves.

'Your dreams are futile!' we say in unison, which was both the working title of this show and the motto of this nation when I was a boy

Dr Eva’s Great Escape, on the other hand, might as well be titled Losing the Run of Herself.

Because Dr Eva is rather unbelievably doing this in an attempt to strengthen her sometimes fraught relationship with her husband, Wyatt.

Wyatt is a no-nonsense engineer in cargo shorts. He has the haunted look of a man who is on television because he misread some small print. He does not seem as enthusiastic about the project as Dr Eva, and they bicker over the details and the cost of everything.

The hotel itself is graffiti-daubed and surrounded by trees on a plain of scrubland. If I know my horror tropes, it has clearly been built on an ancient Native American burial ground, a nuclear waste disposal site or a section 23 ghost estate.

This is good television if only thanks to the inherent sneeriness of the Irish people. Every time Dr Eva surveys the ruins and mentions “her dream” viewers clink glasses and laugh darkly. “Your dreams are futile!” we say in unison, which was both the working title of this show and the motto of this nation when I was a boy.

The cast also include Dr Eva and Wyatt’s large adult sons, Evan (which is just Eva with the extra weight of an “n”) and Chris (short for Christ), who are aged somewhere between two and 47, and who are, in the first episode, living in the haunted ruins. Their primitive living conditions are distressing to Dr Eva and she worries aloud that people will call Childline.

This is going to suck all the fat out of you, those tubes

As Dr Eva’s large adult sons are roughly the size of muscular bullocks, this is unlikely, unless one of them overbalances and crushes a child. It’s unclear what Chris and Evan add to the project. In episode two they are dispatched to purchase Christmas decorations, a task that seems to stretch their abilities quite a bit. They argue over the name of the “jingly balls that hang on Christmas trees” for a while until I plug my ears with bits of my notebook.

But they are there. They are always there (You have my permission to glance ruefully at some of your own family members at this point) and Dr Eva seems thrilled with them. “They are so polite,” she says, which is faint praise when you compare them to Greta Thunberg or that kid with the clocks that was on the Late Late Toy Show a few years ago. They’re also grown adults.

Meanwhile Wyatt is driven further and further into madness by the fact the blueprints for the site make no sense and the budget is growing and Orsmond wanders around, Marie Antoinette-style, saying things like: “This is where we’re going to have the Arabic belly dancing”.

In the first episode Wyatt is left alone in this Portuguese wilderness, where he goes a bit Colonel Kurtz and decides to take unilateral action against man’s ancient enemy: the trees. He inexplicably has them all cut down.

“What have they done with my trees?” Dr Eva wails, and we try to lick her tears from the television screen because we’re sadists who want to watch celebrities fail. Yeah, the reason the Irish never developed a word for “schadenfreude” is because it goes without saying in this country.

Everyone is stressed from all the dream-following they’ve been doing, and Dr Eva feels underappreciated

Plant enthusiast Diarmuid Gavin, last seen sharing an outdoor bath with Dermot Bannon (praise his name), is fetched to sigh at the destruction. He’s no help. He is clearly as appalled as Dr Eva at the destruction of his only friends, the trees, but he doesn’t want to pick sides. He slowly backs away from the property, probably walking backwards all the way home to Ireland.

Dr Eva and Wyatt take a trip to see a branding expert, bicker about Portuguese words, and end up naming their building site Solar Alvura which is, as you know, Portuguese for Crazy Foreigners.

Wyatt learns that part of the building has no foundations, which is apparently a bad thing. They visit another luxury resort up the road where Dr Eva is given a treatment that originated in the film Dune and involves getting into a sort of wetsuit with loads of tubes coming out of it.

“This is going to suck all the fat out of you, those tubes,” says Wyatt, ever the poet. There is a suggestion that Dr Eva gets some unintended pleasure from the suit. I don’t know how to feel about this.

A Portuguese interior designer named Ana is brought on board. Dr Eva works patiently to reduce the weight of her professional self-esteem. “I will be taking the credit for the interior, whatever is the outcome,” says Dr Eva.

Everyone is stressed from all the dream-following they’ve been doing, and Dr Eva feels underappreciated.

But then Wyatt and his two large adult sons organise a surprise Christmas dinner for Eva in the entrance hall she loves so much which is kind of touching. It is, in a way, much like the first nativity all those years before, except with Eva Orsmond’s sons as a sort of large adult two-for-one baby Jesus. Next week we will see what becomes of this new Jerusalem.