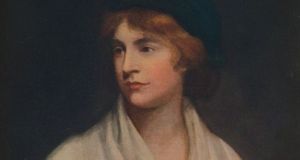 Wollstonecraft, painted by John Opie, was disgusted at how intelligent “society” women were groomed for submission under marriage. Photograph: The Print Collector/Getty Images

Eagle-eyed viewers of the Netflix hit series Bridgerton may have spotted a portrait of Mary Wollstonecraft hanging in the fictional family’s residence. The series’ creators included the background painting of “England’s first feminist” in recognition of the significance of her ideas at the dawn of the Regency era.

Wollstonecraft was disgusted at how intelligent “society” women were groomed for submission under marriage and wrote about it with a journalistic urgency – but there any tenuous parallel with the Bridgerton fairytale ends.

Wollstonecraft spent a formative year working as governess to the daughters of the Anglo-Irish Kingsborough family in Ireland. Her political ideas crystallised in the book A Vindication of the Rights of Woman (1792), in which she went head to head against conservative grandee Edmund Burke.

She died aged 38 on September 10th, 1797, giving birth to her second child, Mary Shelley, who would grow up to be the famous author of Frankenstein.

Wollstonecraft’s writings continue to inspire and her name is enjoying fresh recognition. A statue was unveiled in her honour in London last year – attracting some controversy due to its incorporation of a nude figurine – while Trinity College Dublin has commissioned a sculpture of her under a plan to end the male-only gallery of busts at the Old Library.

This week a new book by Sylvana Tomaselli, Wollstonecraft: Philosophy, Passion and Politics (Princeton University Press), explores the richness and complexity of her thought. Among the anecdotes of interest to Irish readers will be Wollstonecraft’s proclaimed longing to return to Ireland “and, in particular, the dear county of Clare” where “the women are all handsome and the men all agreeable”.

Wollstonecraft had a lot to say about just about everything

Tomaselli says: “No one can stop Wollstonecraft being appropriated by any one school of thought or ideological party, but it is best not to approach her with preconceptions of what she ought to be or with a view to classifying her in one box or other.” She explains further as this week’s Unthinkable guest.

Is the label “England’s first feminist” an accurate one for Wollstonecraft?

Sylvana Tomaselli: “While Wollstonecraft is often described as the first English feminist, that title has also often been conferred on Mary Astell (1666-1731). As to Wollstonecraft being a feminist, there is no doubt, if by feminist one means that she deplored the condition of women and argued for what needed to be done to end what she saw as the injustice being done to them at every level.

“The important thing is not to read her writings for what one deems to be a supposedly ‘proper’ or full-fledged feminist and accord or deduct brownie points in accordance with her meeting or failing to meet these criteria. What matters is to read her as she thought of herself. I should say one should endeavour to read her as one thinks she thought of herself. Recovering that is obviously not an uncontentious matter, but one should try.

“Wollstonecraft had a lot to say about just about everything. She should be taken, in the main, as a philosopher and a moralist, as she described herself.”

What was her main contribution to philosophy?

“It was firstly to hold up a mirror to society and show its contradictory expectations of women. That is expecting them to fulfil duties as wives, mothers and neighbours, for which society not only did not prepare them, but actively worked to make them incapable of so doing, if only through denying them the requisite education to recognise, let alone perform these duties.

“Wollstonecraft did not only shine a critical light on her society. She sought to understand how the ideas her contemporaries had of the nature of man and woman had come into being. This took her to examine the origins of our ideas more generally, but more specifically, because of her engagement with Burke, she was led to reflect on our ideas of the sublime and the beautiful as well as our capacity to imitate and to change.

“Had she not died of septicaemia following the birth of her second daughter, she would no doubt have pursued these philosophical reflections – as is made clear by the notes she left towards a second volume of A Vindication of the Rights of Woman, known as Hints.

“What writings of her we do have leave no doubt that she thought a total transformation of our aesthetic and moral notions would be required for men and women to fulfil their nature as rational social beings. Political revolution would not suffice.”

Even though her most famous book has “rights” in the title, is she closer to being a virtue theorist than a human rights theorist in the modern sense?

“Here again labels might be more of a hindrance than a help to understand her but, if pressed very hard, I would have to agree, though she would not understand and indeed would reject such a distinction . . .

“Wollstonecraft thought and wrote within a Christian framework. She thought humanity had marred the creation, although not irremediably so.”

Her time as a governess to the Kingsborough family in Ireland seems to have been influential in shaping her world view. Can you explain how so?

“Something rather complicated or elusive happened in that period. By her own admission she was treated well. Indeed, she leaves it to understand that she was treated as an equal or at least not an unequal. She appears to have been included in social events and invited to musical performances.

“What seems to have shocked her was the feminine ideal embodied by Lady Kingsborough, her detachment as a mother and comparative over-fondness for her dogs, the concern for appearances, the instrumental conception of marriage and so forth. In other words, all that she was to decry in her attack on Burke in her first overtly political work, Vindication on the Rights of Men, and again in her second Vindication.”

You observe in the book that she explored the tension between love and moral principles: “Should one raise one’s children to thrive in the world as it is or raise them as they ought to be in anticipation of a world that may not be realised in their lifetime?” How did she settle that debate?

“She died long before she had to decide which to choose in relation to her daughters. The point is that this is a dilemma we all must face in relation to ourselves as well as our children. The difference is that few of us articulate it out loud.

“My sense of her, such as it is, is that she would have raised Fanny [her first child, born three years before her death] and Mary according to her moral principles, but with just enough ability to appear to be whatever they had to, should the need to appear rather than be become a matter of survival.”

Wollstonecraft – in her own words:

“Men and women must be educated, in a great degree, by the opinions and manners of the society they live in. In every age there has been a stream of popular opinion that has carried all before it . . . It may then be fairly inferred that, till society be differently constituted, much cannot be expected from education.”